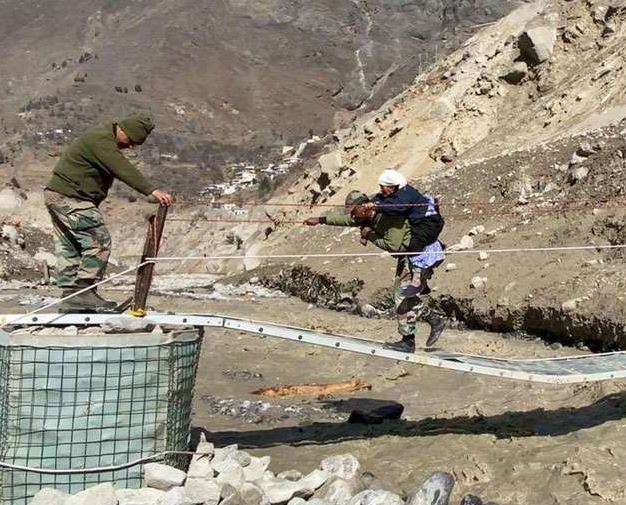 The soldiers who have lost their lives to protect the country are also playing an important role in disaster relief and rescue work. He is proving to be no less than an angel to the local residents. The army also did a very commendable job in the disaster of 2013 and that is why the entire nation is proud of the army.

#UttarakhandDisaster Chamoli disaster has broken many bridges in the state. The army has built some temporary bridges to help the local people and provide relief work. Army soldiers sitting on the shoulders of elders and children were crossing these bridges. This spirit of the soldiers is very much appreciated.

Dealing with any disaster in the country cannot be imagined without the cooperation of the army. The motor bridge and swing bridge were swept away here in the deluge in Rishiganga. Dozens of villagers were imprisoned in their homes. The military and the ITBP had also lost contact with the country and the world. In such a situation, the army started the movement of people on Rishiganga by constructing an alternate bridge near the Rishiganga Power Project. More than 700 people have moved through this bridge in the last four days.

Eight Bengal Engineering Army personnel are deployed here, who are making safe movement of people through this bridge. The elderly, and children are sitting in their shoulders. 200 to 300 people are moving every day. The army made the first wire and then trolley movement to Bhanguel and Gahar village. Here also the army personnel are making safe movement of the villagers. Every day 200 to 300 people are moving here. Apart from this, army personnel are going to the village to deliver relief materials and are tying the disaster affected.

Uttaraksh Shukla of Bengal Engineer Army says that we had prepared the bridge here in a day. The army has been providing safe movement here for four days. 200 to 300 people are moving through this alternate bridge every day. The elderly and children are taken to the shoulder and are making safe movement.