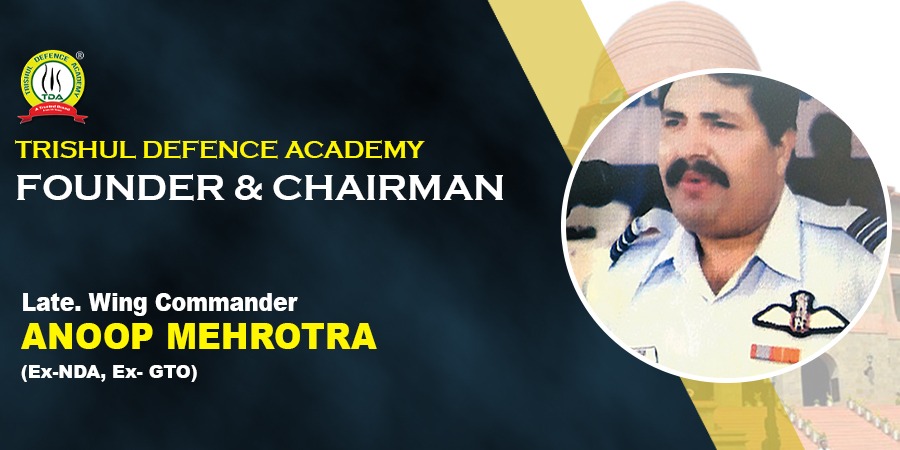 “The Dawn does not come twice to awaken the Man”

Late Wing Cdr. Anoop Mehrotra was a veteran Of Indian Airforce and an alumnus of the prestigious Defence Institution, National Defence Academy (NDA). He was a cadet of NDA 60th Course. He passed out from NDA and commissioned as a flying officer in Indian Airforce.

He was commissioned as bomber Pilot in the Indian Air Force in the year 1982. He had shown an active participation in operation Pawan . The year 1996 saw him qualifying as a GTO ( Group Testing Officer) . As a Group Testing officer he had also served in a various selection boards of Airforce (Varanasi, Mysore) and Army (Allahabad) for many years. He had also cross-trained many students as a psychological Officer in 19 SSB board Allahabad.

After retiring from Indian Airforce he kept on motivating the young blood to strive to join defence services . With the same aim in mind Late Wing Cdr. Anoop Mehrotra Sir founded the first ever Defence academy in Allahabad i.e. Trishul Defence Academy in 2003 which has created history by giving the highest pass percentage in NDA, CDS , AF , Navy etc. like examination as well as in SSB Interview.

Under his guidance till his sad demise Trishul Defence Academy had given more than 600 officers and more than more than 2000 Jawans to Indian Armed Forces.