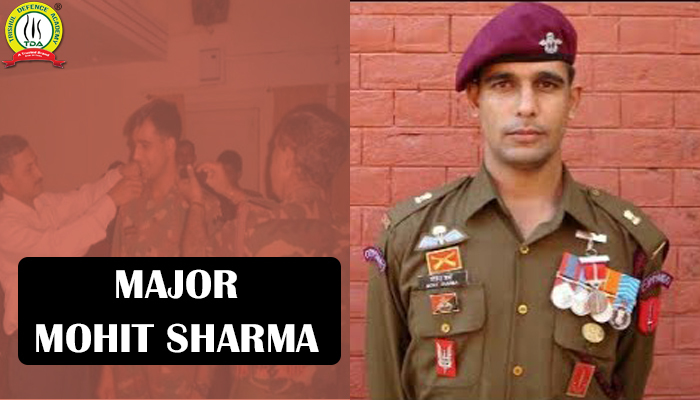 Story Of Major Mohit Sharma : Today we are going to talk about Bharat Mata’s special son and the espionage hero of the army- Major Mohit Sharma. He was the one who saved his 2 associates alone and took the fight with 25 terrorists. Major Mohit Sharma was born on 13 January 1978 in Rasna village in Meerut district of Uttar Pradesh.

Martyr Major Mohit Sharma’s family wanted him to be an engineer. In such a situation, Major Mohit had passed by giving engineering entrance exam But the spirit of patriotism was in him from childhood. Therefore he also gave the entrance exam of NDA. In which he was selected and he joined the service of the armed forces of the country.

He got promoted to Major from Captain in 2009. On March 2009, he was in Kupwara, Kashmir with his team, where he was informed about the camp of terrorists in Hafruda forest. Major Mohit Sharma camped in the forest with his team. There is an incident of 21 March 2009 when the encounter with the terrorists of Major and his troop started. Major Mohit was shot in this encounter.

Major Mohit’s two companions were also injured by the bullet. In such a situation, Major Mohit evacuated both of his team members from there and, despite being shot, he shot down four terrorists by throwing grenades while gaining heroic speed. Eight soldiers, including an army major, were martyred in this encounter. The martyrdom of Major Mohit was conferred with the posthumously Ashoka Chakra medal.

Demonstrating the extraordinary valour and inspiring leadership of Major Mohit Sharma, the terrorists had to face every moment firmly. During another encounter in Jammu and Kashmir, Major along with his comrades raided the terrorists. For which he was also awarded the Commendation Medal by Chief of Army Staff.

Even today, Major Mohit Sharma, Officer of Para Special Forces who belonged Rohtak, Haryana, is remembered from house to house for his bravery and ultimate sacrifice. The martyr, posthumously awarded the Ashoka Chakra, breathed his last in 2009 during a military operation in Kupwara district of North Kashmir. But, an operation done by him in the year 2004 is still an inspiration for many.

Major carried out his operation at Shopian, 50 km from South Kashmir. Major first changed his name and look for this operation. They made their gestures like terrorists with a long beard and moustache. Then he came in contact with Abu Torara and Abu Sabzar through the name Iftikhar Bhatt.

Major then convinced Iftikhar Bhatt, both Hizbul militants, to say that his brother was killed by the Indian Army in 2001 and now he wants revenge by simply attacking the army. He told the terrorists that they wanted their help in this work. Major Sharma told both the terrorists that they had to attack the checkpoint of the army and for that, he had done the groundwork.

In this operation of Major Sharma, the terrorists asked him his identity several times. But he would say, “I need your help. I have to learn. ” terrorist Abu Torara asked him several times about his identity. But eventually, he falls into the trap of Major Sharma and agrees to help. The terrorists told him that he would remain underground for several weeks and would seek help for the terrorist attack. Somehow Major convinced him that he would not return home until he blew the checkpoint.

Both the terrorists made all arrangements in the days to come. Also called three terrorists from nearby villages. When Torara was doubted again, the Major said to him, “If there is any doubt about me, kill me.” Leaving the rifle with his hand, he said to the terrorists, “You can’t do this if you don’t believe me.” So you have no choice but to kill me now. ”

Major Mohit Sharma was a special army officer who operated in anti-terrorism espionage missions. He was a trained para commando and also had the advanced skills sets of that of an intelligence officer and spy. With his ultimate tactics and sharp strategical mind, he accomplished really challenging anti-terrorist operations. India will always be proud of him. Trishul Defence Academy pays tribute to Martryr Major Mohit Sharma. Jai Hind !