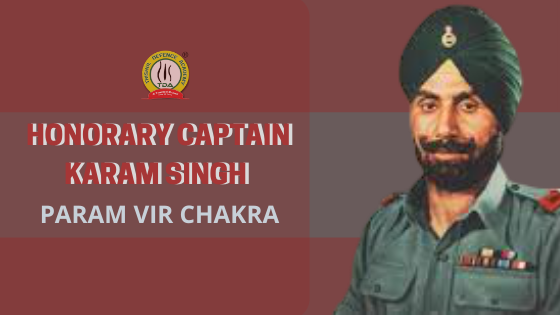 Born on 15 Sep 1915 , Honorary Captain Karam Singh belong to the Bhaliawala village in Sangrur district of Punjab. His father Sardar Uttam Singh was a farmer.   Since his childhood he was fond of thrill and adventure.  He was inspired to join army by his uncle as he was JCO in army. He joined army at the age of 26 on 15 Sep 1941.

After  completed his training from Ranchi he was inducted to Sikh Regiment in Aug 1942.  He participated in the World War II and  he was awarded military medal-  gallantry award of Britain

During World War II, Hon Capt Singh faced Japanese soldiers at the Burma Front in 1945. He fought in the deep jungles of Burma against the formidable force of the Japanese. For his astute bravery and skill, he was awarded the gallantry medal of Britain, the “Military Medal” on 14th March 1944.

During war of J&K, Indian army had substantial gains in the Tithwal sector. They seize controlled which resulted enemy to abandon the mission.  However enemy  were not ready to leave Tithwal.  The battle for Tithwal continued for months and Pakistani Army constantly tried to capture it. Capturing of Tithwal, with Richmar Gali became the main goal of Pakistani Army.

On 13th October 1948, the Pakistan Army launched an attack with a Brigade strength to evict the Indian Army from their strongly held positions. The enemy troops heavily outnumbered the Sikh Regiment and launched no less than 8 attacks on their post. The Indian troops fought fiercely. Due to heavy firing the communication lines were damaged and lance Naik was unable to call for reinforcement.

Despite of being ran out of ammunition’s and wounded Captain Karam Singh decided to fight rather evacuate. He ran here and there and encouraged his men to fight and charged the enemy with his grenades.

He was left with just one choice – to fight the enemy with whatever little army and weapons he had and he  refused to evacuate the post even when the enemy got very close. When enemy soldiers came even closer, Karam Singh jumped out of his trench and stabbed two intruders to death.

During the fifth enemy attack, he fought hand to hand with two enemies and bayoneted them to death. His actions inspired his men and demoralized the enemy. Finally they fought off the last attack on the night of 13th October. The Sikh regiment had lost 15 men while the enemy forces lost nearly 300. The enemy could not capture a single bunker.

For his absolute bravery and disregard for his own life in lieu of his nation, Lance Naik Karam Singh was awarded the revered Param Vir Chakra. He was the first non-posthumous recipient of the award and also became the only Indian to receive the highest gallantry award from both Indian and British governments. He retired from the army as Subedar and Honorary Captain and left for his heavenly abode due to natural causes on 20th June 1993 at the age of 77. 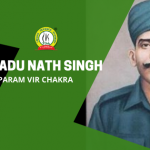 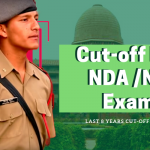