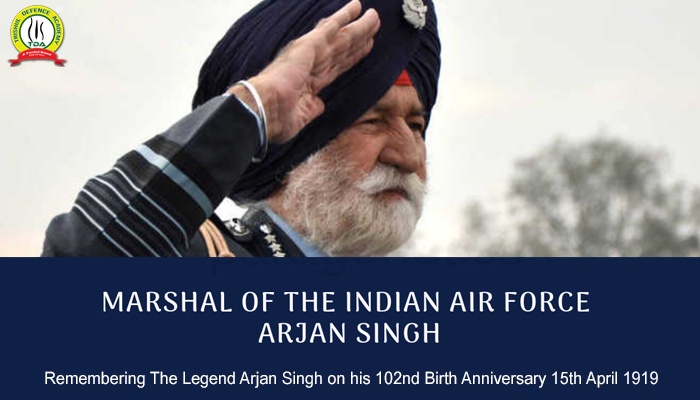 Tribute to Marshal of Indian Air Force Arjan Singh on 102nd Birth anniversary Marshal Arjan Singh, the Indian Air Force commander during the 1965 India-Pakistan war, died on September 16, 2017, at the age of 98. Singh was the first officer in the Indian Air Force to be promoted to the rank of five-star general, which is equivalent to a field marshal in the Army.
During the Arakan Campaign in 1944, Arjan Singh led the squadron against the Japanese. Providing close air support during the critical Imphal Campaign, as well as assisting the allied forces’ advance to Rangoon, Burma. Arjan Singh was awarded the Distinguished Flying Cross (DFC) in 1944 for playing pivotal role in successfully leading the squadron in combat. After the war, he was given command of the IAF Display Flight, which flew Hawker Hurricanes around India giving demonstrations. He had the rare honour of leading a fly-past of over a hundred IAF aircraft over Delhi, over the red fort, on August 15, 1947.
He was promoted to the post of Wing Commander and attended Staff College in the United Kingdom before becoming the AOC, Ambala, in the rank of Group Captain, shortly after India’s independence. Arjan Singh was promoted to Air Commodore in 1949 and assumed command of the Air Officer Commanding of Operational Command, later known as Western Air Command. Arjan Singh had the distinction of serving as the AOC of Operational Command for the longest periods of time, from 1949 to 1952 and again from 1957 to 1961. He was the AOC-in-C of Operational Command after being promoted to Air Vice Marshal. He was named the DCAS at the end of the war in 1962, and by 1963, he was the VCAS.

He was the overall commander of the IAF, RAF, and RAAF’s joint air training exercise “Shiksha.” Arjan Singh was appointed Chief of Air Staff in the rank of Air Marshal on August 1, 1964, marking the pinnacle of his career. Arjan Singh was the first Air Chief to keep his flying category until he was promoted to the rank of CAS. He had flown over 60 different types of aircraft, ranging from pre-WWII biplanes to more modern Gnats & Vampires, as well as transports such as the Super Constellation. Arjan Singh’s, testing time came in September 1965, when India-Pakistan war kicked off.
He was summoned to the Defence Minister’s office with a plea for air support when Pakistan launched Operation Grand Slam, an armoured assault on the strategic town of Akhnur. He responded, “…in an hour,” with his typical nonchalance. In reality, the Pakistani offensive was hit by the air force in under an hour. He led the Air Force to victory in the battle, demonstrating effective leadership and effort. Though mistakes were made and preparation could have been better on some levels, it must be said that the Indian Army and the Indian Air Force share credit for thwarting Ayub Khan’s grandiose attempts to seize Kashmir, with Arjan Singh leading the air force.
For his leadership of the air force, Arjan Singh was awarded the Padma Vibhushan, and in recognition of the air force’s contribution to the war, the rank of the CAS was elevated to that of Air Chief Marshal, and Arjan Singh became the Indian Air Force’s first Air Chief Marshal. In August 1969, he announced his retirement and accepted the position of ambassador to Switzerland. He remained a flyer to the end of his tenure in the IAF, visiting forward squadrons & units and travelling with them. He will remain a source of inspiration for budding officers for several years to come. In January 2002, the Government of India awarded Arjan Singh the rank of Marshal of the Air Force in appreciation of his services, making him the Indian Air Force’s first and only ‘Five Star’ rank officer.