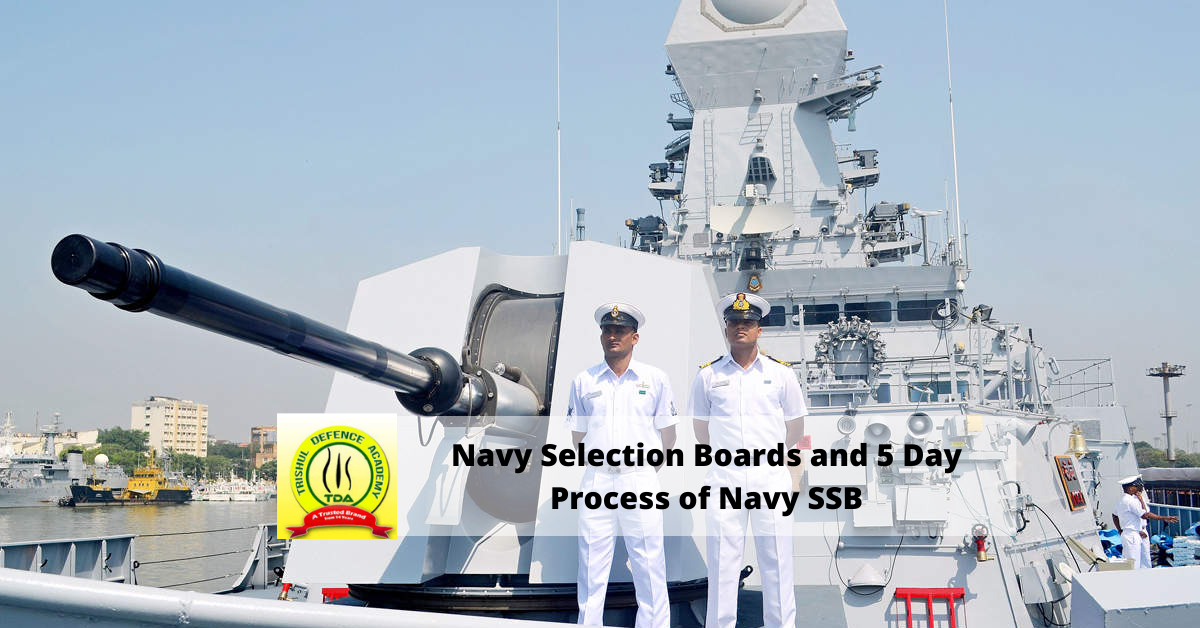 Navy SSB (Services Selection Board) is the official body of the Indian Navy which conducts the selection process for candidates who wish to join the Indian Navy and serve their nation in the white uniform. In this blog, we will discuss the day by day process of SSB after which the final recruitment of a candidate is done. It is to be noted that the Navy SSB process is quite similar to that of the Indian Army.

The major objective towards the end of the day is to find the Officers Like Qualities in the candidates. It is the same objective for SSB interview rouns in Indian Air Force, Indian Navy, and Indian Army.

How To Appear In Navy SSB Interview

For Indian Navy aspirants, it is important to apply and qualify in the following entrance examinations.

Day 1 of NAVY SSB consists of reporting of students at the railway stations followed by their briefing by the respective officers.

Under the Screening Day Round, around 70 % of students are filtered out as they fail to clear their exams. Only 30 % of students proceed towards the next round.

Screening Round consists of the following tests:-

Officer Intelligence Rating Test (OIR Test -Paper I & II)- In this test, the overall intelligence aspect is tested. It consists of Verbal and Non-verbal Tests. The candidate gets two booklets with 40-50 questions each. Total time allotted is 30 minutes.

This test is categorized into two tests- Picture Perception and Group Discussion.

Picture Perception: An image is displayed for 30 seconds and the candidates need to note down its details such as age, mood, sex, characters and action. The candidate then creates a story based on the image in 4.5 minutes only.

Group Discussion: A group discussion takes place between 10-15 students and each one need to narrate his/her own story and then discuss it in the group in order to reach a common consensus. The results are declared after then the shortlisted candidates are advanced to the next round of testing.

Day 2 of Navy SSB Interview includes the Psychological test which is conducted to judge the psyche of the candidate as per the required standards of Indian Navy.

Navy’s SSB Interview’s Day 3 and Day 4 include Group Testing activities that involve various outdoor tests that are conducted in groups. Following are the activities under it

The GD (Group Discussion) is held on two topics on back to back basis. Topics are based on current affairs or social issues. The GD round is held for 20-30 minutes for each topic.

In this test, the candidate is formed into the group of 10-15 and they are given a story based on a certain issue. Candidates are needed to identify the issues and provide a practical solution to it.

In this round, the candidates are formed in the group of 10-15 people. They need to overcome 4 obstacles collectively as a group with the helping material and a load with some rules.

It is commonly known as Snake Race where each group is to compete against another group for 6 obstacles.

This activity is similar to PGT but is conducted with a half group in number and over a single obstacle.

Every candidate is given 4 topics out of which he needs to choose one and speak on it for 3 minutes.

Each candidate is made the commander and is given an obstacle to which he or she needs to pass on with the aid of subordinates.

Each candidate needs to clear 10 allowed obstacles in 3 minutes with a difficulty level of 1-10.

The whole group is reformed and is needed to finish the assigned task in the given time.

After all, tests taken from Day 1 to Day 4 finally the PI (Personal Interview) test round is conducted. Personal Interview is another test and is not part of the group testing. This test aims at checking the personality of the individual whether the candidate has the personal ability to be an Army Officer in future.

PI (Personal Interview) rounds are held during Day 3 to Day 4 after the daily tasks for those days are completed. Interviews are usually related to everyday experiences, work, education, family, hobbies and achievements in academics etc.

The final day of NavySSB Interview is Hheldwith a closing address then the conference is held. A board conference is organized where all the officers who assessed the candidates in the previous days are present in uniforms.

Each candidate is given their final assessment and the board collectively makes a recommendation. After this, the final result is out and the shortlisted candidates are to proceed with the next round of medical test.

Under the guidance of SSB Guru Wing Commander Anoop Mehrotra (Ex NDA, Ex GTO, 19 SSB Allahabad, 4 AFSB Varanasi and 2 AFSB Mysore) prepare for each and every test of SSB with full expertise.

Ranging from written, psychological or group tasks, with TDA you are determined for success. Candidates have to carry the following dressing items under t To connect and follow your dream of passing your desired Defence Exam- NDA, CDS, AFCAT, NAVY SSR/AA etc.

For any query/enquiry you can connect us via the following ways: –