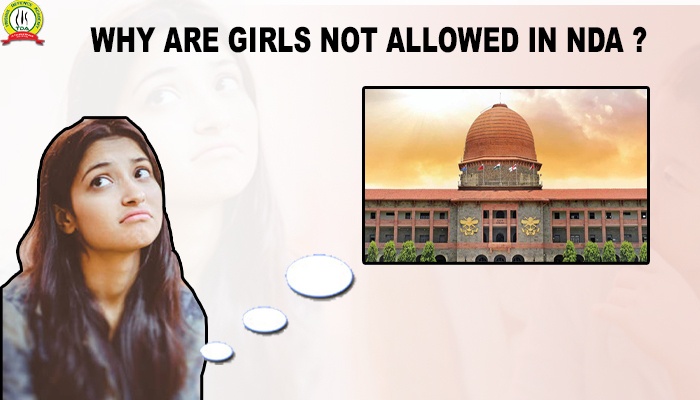 Girls seeking careers in the armed forces are currently allowed entry via CDS and technical entry exams. There are several concerns that are preventing lawmakers from allowing entry of girls into the armed forces via NDA examination. Let us explain you in a simple and easy-to-understand way.

Here’s Some Reason why we are not ready yet.

Combat Role in NDA: National Defence Academy prepares a cadet for a combat role. The training methodology is quite rigorous and carried out mainly for war preparation. Allowing girls in NDA will require a complete overhaul of the infrastructure and training process, which is a Herculean task and require meticulous planning to execute such a possibility.

NDA Training: Women are inducted into the armed forces for a period of 14 years. Training of cadets in NDA involves a whopping expenditure in terms of infrastructure, facilities, and allied activities. The maxim of losing RoI (return of investment) on expenditure incurred by the government further curtails the entry of women in NDA.

Male-centric Infrastructure: Soon after gaining Independence, war broke out with Pakistan in 1948. Over the years, our armed forces are facing continuous threats, infiltration, and attempt to alter geographical boundaries by our aggressive neighbors. Continuous war threat and huge expenditure involved in securing borders from infiltration attempts and successive wars have jeopardized the chances of inventing, performing, and implementing out-of-the-box ideas to allow fair sex a fair chance by introducing gender equality for combat roles. Those equipped with the nuanced understanding may find this argument repulsive. However, there is no denying that this remains an issue at a pragmatic level in NDA.

Social Hurdles: Nowadays, women stand equivalent to men in every field, then why not a defense. However, this is due to the lack of understanding of issues and a utopian idea to have women in combat. There are arguments that a woman may not be able to meet the challenges and hazards of military service due to their psychological limitations and domestic obligations. It also said that male troops, who are predominantly drawn from rural backgrounds, may be unwilling to accept a woman commander. The point raised by activists seeking gender equality is justified but the change of mindset is still a far cry. The majority of us are still living in a patriarchal society, where women are considered as the inferior or weaker sex. We do acknowledge the fact that times are changing rapidly and there are states where the ratio of females exceeds that of their male counterparts. The social change will take some more time to materialize. And, we are confident that the day is not too far.

Safety: The safety and security of women in NDA is the biggest concern before the authorities. Our political leadership is still skeptical of the idea. They do want to take any risk for the fear of backlash. How the government will ensure the security of women jawan and officers if they fall in enemy’s captivity or trap during the war. In war or counter-insurgency operations, one cannot guarantee that women will not fall into the captivity of the enemy. Wing Commander Abhinandan Varthaman was shot down in the 2019 Balakot airstrike in aerial combat and captured. Imagine the outpouring of emotions nationally if this was a female pilot. Now, please don’t say that it would not have mattered. We are a country that fell to its knees when a civilian aircraft was hijacked by terrorists, forcing us to release terrorists. As of now, our mindset does not permit us to take such a bold decision. To sum up, it is still not an implementable idea, at least for now.

One can go on and cite numerous examples. It is important to stop pushing the notion of allowing women in combat roles for the sake of promoting gender equality and start thinking from a practical point of view, keeping the ‘India’s Social’ reality in mind.

Post Views: 178
NDA 2021 NDA Coaching in Allahabad NDA for Girls Why Are Girls Not Allowed in NDA