What is the difference between Army, Navy and Air Force?

The President of India serves as Supreme Commander of the Indian Navy, India Air Force and Indian Army.

Below are the names of commanding officers

Here are some of the differences between the armed forces of our country.

An army is a ground fighting force that fights primarily on land. It is the land based branch of military organized and trained for land warfare. Army consists of soldiers equipped with arms and other fighting vehicles and equipment like tanks, artillery, anti-missile defence equipment etc.

It is the branch of a nation’s military principally designated for naval and amphibious warfare. It mainly conducts military operations at sea. It’s operations includes anything conducted by surface ships, amphibious ships, submarines, and seaborne aviation.

Air Force primarily conducts aerial warfare. Typically, air forces are responsible for gaining control of the air, carrying out strategic and tactical bombing missions, and providing support to land and naval forces. Air forces typically consist of a combination of fighter jets, bombers, helicopters, transport planes and other aircraft. In addition to pilots, air forces have ground support staff who support the aircrew. Thus air force is responsible for not only the air-air combat but also for ground strike missions.

Army – Service Before Self

With all these differences they just have one common aim i.e. to protect our country.

And for those who has this aim of serving the Nation, Trishul Defence academy i.e., the best Academy for Defence in the North India will help you to achieve this aim and fulfil your dream. 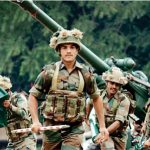 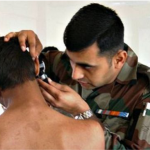