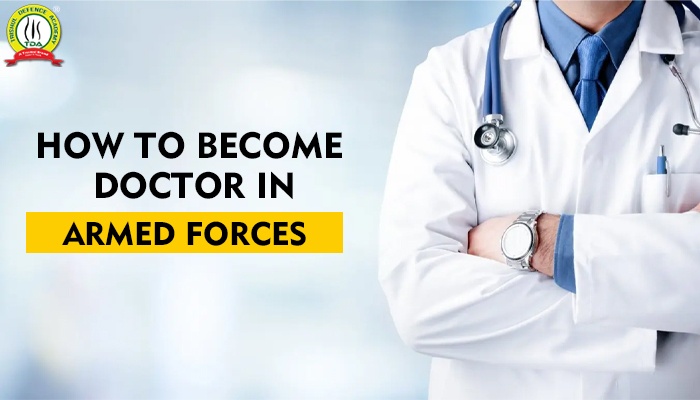 How to become a doctor in Armed Forces: Are you seeking a medical career and looking forward to join Armed Forces? If yes, then your search ends right here. We are here to provide you complete insight and procedure on how to become a doctor and serve the armed forces either via permanent or short-term commission. The first route is via Armed Forces Medical Corps (AFMC), Pune, which provides you MBBS degree and paves way for a lucrative career ahead. Earlier, AFMC used to conduct its own examination, but it was later scrapped. Now, NEET score of the candidate is taken into consideration, which will be followed by an interview and medical examination.

Candidates also have the choice to switch over from short service to permanent commission. Switch over can be carried out easily by giving an interview after completing two years of initial service or a maximum of nine years.

Army Dental Corps (ADC) provides you an alternative route. For this, you either need a bachelor’s or master’s degree in dental science. The maximum age for bachelor’s and master’s in dental science is 28 and 30 years respectively. The candidate also needs a certificate of registration and one-year internship from the Dental Council. The candidate fulfilling the above-mentioned criteria can apply at Army Dental Corps (ADC), which will be followed by a normal interview by doctors at Research & Referral Hospital, New Delhi and a medical examination.

Till now candidates have got acquainted with two routes on how to become a doctor. If a candidate fails to fulfill the requirement of the above-mentioned routes, then too, this is not an end of the road. There is still a third route under Short Service Commission, vacancy under which is released by Army twice a year. A candidate can apply till the age of 45 and needs either a MBBS or MS degree recognised by Medical Council of India (MCI). The job tenure is of five years, which can be extended upto nine years. The total tenure of job is of fourteen years.

Those candidates, who are mulling on how to become a doctor in Armed Forces, still have a silver lining in the form of veterinary doctor. This is also a short service commission entry. The candidates interested in applying for the position should have BVSc/BVSc and AH degree from any of the recognised Indian universities. The Remount and Veterinary Corps is an administrative and operational branch of the Indian Army, and one of its oldest formations but only males are allowed entry through it. It is responsible for breeding, rearing and training of all animals used in the army. Do not wait anymore! Simply make up your mind and get professional help at Trishul Defence Academy and embark on a high flying career in armed forces.

Do you wish to prepare for MNS (Military Nursing Services Exam)?  f Yes, Then TDA is your study point!