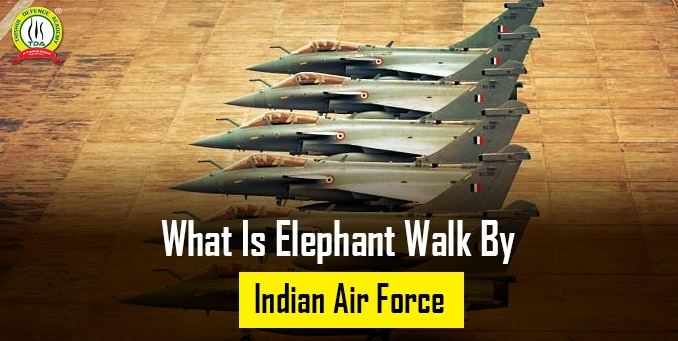 In this interesting and informative blog we are going to discuss about a very special theme act of Indian Air Force which not many IAF aspirants would be aware of but would surely like to know. We are going to tell you about Elephant Walk done by Aircrafts of Indian Air Force and how it was acted on the red letter day of 75th Independence Day Celebration- Azaadi Amrit Mahotsav.

What Is Elephant Walk in Indian Air Force ?

When several fighter planes take off from the same place at the same time, the close formation just before take off is called ‘Elephant Walk’. This term is used by the US Air Force.

The term was first used during World War II, when a large number of Allied fighters flew together to attack. The fleet contained about 1,000 aircrafts.

Seeing them, it seemed as if a herd of elephants was going towards some water source to quench their thirst. That’s why it was named Elephant Walk.

The benefits of an elephant walk include being able to show the capability of the units as well as teamwork. It is often performed to prepare squadrons for wartime operations and to prepare pilots for the launching of fully armed aircraft in one mass event.

Seeing the pictures shared by the Air Force, where every Indian’s chest will widen with pride, the enemy’s heart will tremble.