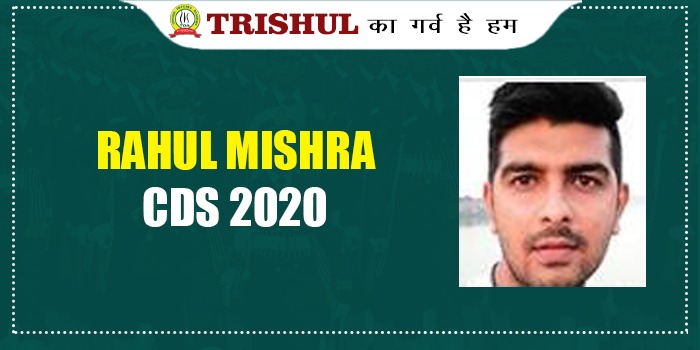 Today we are going to talk about Trishul Defence Academy’s latest success product Rahul Mishra who has successfully cleared the CDS exam 2020. He has achieved the feat of joining Trishu’s Hall Of Fame of successful students. Get to know his interesting yet inspiring story of becoming an aspirant to achiever.

Rahul Mishra, son of fireman Dharmendra Mishra posted in Prayagraj’s fire department, will now be a lieutenant in the army. Rahul has secured 54th rank in All India in the Combined Defence Services-2020 (CDS) exam of Union Public Service Commission (UPPSC). Rahul represented Uttar Pradesh in the Republic Day parade held in Delhi in 2015.

At the same time, India was represented at the international level in the Luce Championship held in Sri Lanka. There he was awarded the Silver Medal by the Defense Minister of Sri Lanka.

Rahul says that when he gave the CDS exam, he was sure that he would be successful. But there was little confidence that he would become a lieutenant. When the parents came to know about Rahul’s name in the result on May 27, his got filled with pride.

Rahul says that he feels proud to see his father as a soldier because if he had not been a soldier, we would not have had the urge to become an officer. Seeing their hard work day and night and dedication for the family in the meantime, it seemed that something had to be shown.

His father Dharmendra Mishra says that he or his family had to suffer the biggest expense of working in the fire brigade that there was no time for their duty. Overnight, they have to go anytime, play with dangers. Therefore, he could not give more time to the children. His wife was 8th pass, so she too could not contribute much in studies for children.

Dharmendra says that he only told the children that today’s hard work will decide their future tomorrow. Thinking about doing something, whether it is right or wrong. By tying these wordings of his father, son Rahul, who always walks in life, today waved the flag of success. Seeing this, tears of joy spilt in the eyes of the parents.

Dharmendra Kumar Mishra has been awarded a medal by the President on 26 January 2019, apart from this he has also received many medals.

Rahul Mishra joined Trishul Defence Academy with the sole aim of clearing CDS exam and become an officer in Indian Armed Forces. TDA’s founder-director Late Wing Commander Anoop Mehrotra Sir and his dedicated team saw huge potential in him and thus emphasized special guidance and preparedness onto him and today the hard work and time invested by Trishul have paved the way for success for Rahul who is going to be an officer in Indian Armed Forces and will serve the nation wearing the highly decorated uniform.

He gives the entire credit to Trishul Defence Academy on his fabulous achievement of successfully clearing the CDS exam in his own following words:-

“I, from the bottom of my heart would like to express my gratitude towards the entire Trishul Defence Academy which under the guidance of Founder Late Wing Commander Anoop Mehrotra Sir guided, prepared and motivated me for every obstacle in terms of mental and physical form and here I have made my dream of clearing CDS come true only because of them”.

Trishul Defence Academy takes pride in every Trishulian’s success as their achievement is also ours. We wish Rahul Mishra all the very best in his defence service career. Jai Hind !

Just like Rahul Mishra even you can be a part of the glorious and highly decorated Indian Armed Forces. CDS 2021 exam is the golden opportunity for all the graduates who wish to serve the nation and lead a successful and once in a lifetime journey in Defence. Come and join today- India’s #1 Defence Coaching Institute- Trishul Defence Academy where success is the result!