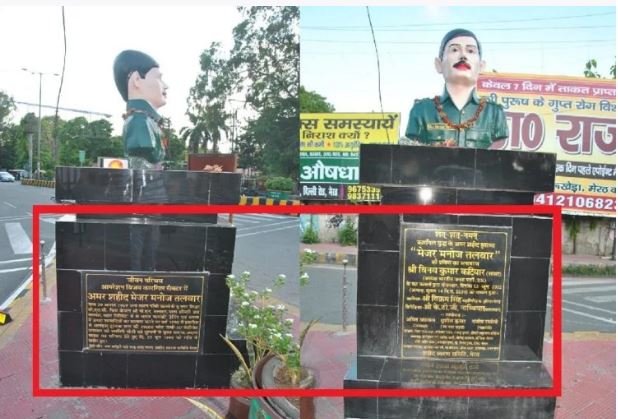 There was a a Kargil War Hero Major Manoj Talwar who was martyred in the battlefield. When the body reached home, the postman came back and forth with the letter. Major Manoj wrote this letter a day before his martyrdom, sitting in a bunker in minus 40 degree temperature, amidst the sound of cannonballs.

Even in such an environment, he had written the same thing -“dear mom and dad… take care of yourself. Don’t worry about me If I come, I will come only after winning, even if I come wrapped in the tricolour. Today we apologize to such a martyr son. Today, our Meerut, which has the tag of Krantidhara (land of revolution), could not even save the statue of such martyrs. Major Manoj !  We are ashamed… Your martyrdom is worth so much here.

This is not a film story. This is the reality of working style of the corrupt adminstration officers posted here. Major Manoj Talwar was martyred on 13 June 1999 in the Battle of Kargil. When his dead body came home, people came here from as far as Muzaffarnagar.

For many kilometers there was no place to set foot on the road. Till the sun will remain the moon, “Jab Tak Tera Naam Rahega, Manoj tera naam rahega”… Slogans were echoing. The MPs, MLAs, ministers and officers did not know who were making promises. Captain PL Talwar, a resident of Defense Colony, who is the father of the marytred army captain, just kept on shedding tears in the sorrow. He was sure that his son’s martyrdom would be recognized in Meerut, but it turned out to be his mistake.

There is no such disgrace to the martyr.Then newspaper Amar Ujala launched a campaign and got the martyr’s statue re-established at the crossroads. But the stone which was placed here that the date of martyrdom of Major Manoj was written on it instead of June 13, June 23.

Five days ago, on June 13, on the day of the martyrdom of Major Manoj, MP Rajendra Agarwal wrote a letter to the Mayor asking him to rectify this date. All the top officials of the city gave statements that the date would be corrected. On Friday, the Municipal Corporation also got the work done by sending artisans-labourers on the stone slab.

Those who show the prestige of being a government officer, they may not even have the time to go there. This was the reason that the date of martyrdom of Major Manoj was not correct, but when the statue was unveiled on 22 July 2002, the date of that stone was changed to 13 June 2002.

That is, the exact date of unveiling of the statue has also been wrong. The stone placed on the side, on which the wrong date of martyrdom of Manoj Talwar is written, may not be seen by the officers-employees of the government departments … or deliberately turned a blind eye … thinking that today the martyr is a little bit.

Trishulians Shine Every Year In NDA Exam…..Do You Wish To Join Their Ranks ? Contact Us Today !