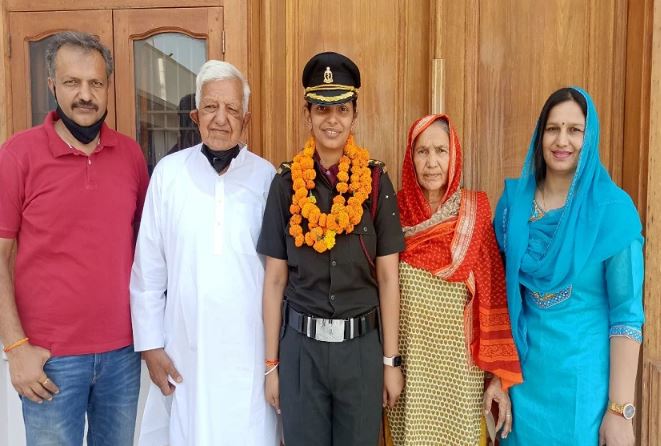 Navya Sangwan’s father Sunil Sangwan is working as a Superintendent of Rohtak Jail and mother Sunita Devi is handling the house along with the professor. Navya’s brother Manav Sangwan is also taking training for a lieutenant in the army after doing NDA. Dada Satpal Sangwan’s politics and father, while holding the post of Jail Superintendent, the family decided to send their son and daughter to the army. It is for this reason that Navya has pledged to serve the country since childhood by joining the army.

The daughter, Navya Sangwan, who grew up with the inspiration of grandfather and father, filled the spirit of service to the country. The primary education of Navya has been done in Dadri itself. Navya told that Dada Satpal Sangwan wanted to send her to the army and constantly inspired her to serve the country.

Former minister Satpal Sangwan told that those who do politics bring their children in politics. Despite this, his dream was to send grandchildren to the army for service to the country. Today, granddaughter Navya has received a commission and has been appointed as a lieutenant in the Medical Corps in the Army, it is a matter of great pride. Grandson Manav Sangwan will also serve the country by taking early training and taking a commission for the post of lieutenant in the army.