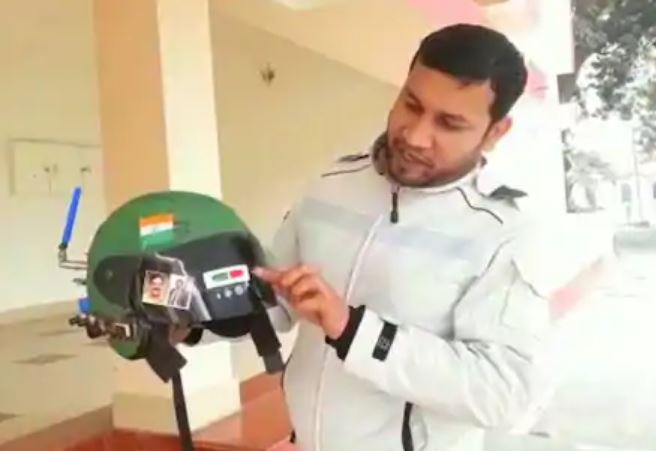 To protect the Indian Army deployed on the border, a young innovator from Kashi, a parliamentary constituency of Prime Minister Narendra Modi has created a unique helmet. This helmet is capable of sending alert messages to soldiers, but can also fire bullets during an emergency. This device will alert the soldiers before the enemy enters the border. Also, through the remote trigger, the soldiers will be able to shower bullets on enemies with its help. The special thing is that as soon as PM Modi’s picture comes in front of this helmet, it starts announcing Vande Mataram. The creator of this special device has named it ‘Smart Defense Helmet’.

This unique smart helmet can bombard bullets in just a few minutes. Not only this, based on the radio frequency system, this device works with electricity as well as solar energy. After long research, it has taken about one and a half years to make it. It has cost 50 thousand to prepare it.

Shyam, who makes this self-defence helmet, says that when it is made on a large scale, the cost will obviously be reduced. The idea of ​​making it came to Shyam when he often saw such news on newspapers and TV channels that the soldiers crossed the border by mistake and they were put in jail after being called spies or intruders. Tortures were given. He told that this helmet has been developed on the normal helmet itself. It has a transmitter, receiver, Arduino circuit, LED indicator, speaker, audio circuit, programming software.

Shyam started working on this device to protect the soldiers from these accidents. This device is completely based on the radiofrequency system. The soldiers posted in the border area will get an audio message before entering the enemy border, which will tell the soldiers that this is the enemy’s border and be alerted. With the help of which the soldiers will be alerted in time and they will be saved from entering the enemy range. Apart from this, jawans can also be firing from the trigger fitted in this ‘Smart Defense Helmet’. The special thing is that as soon as the photo of PM Modi comes in front of this helmet, then it starts announcing Vande Mataram.