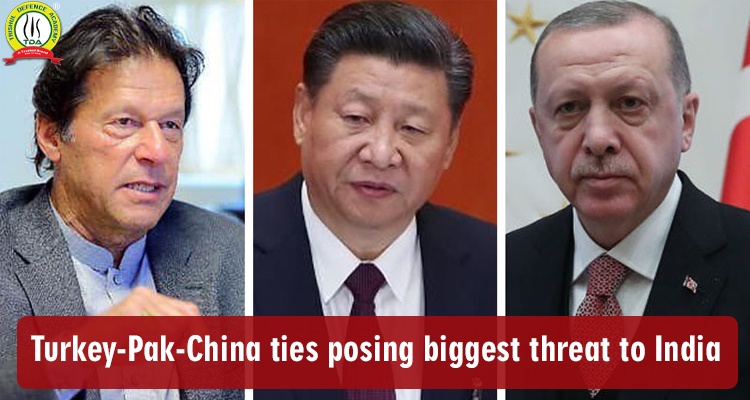 NEW DELHI: The China-Pak-Turkey axis is turning out to be the deadliest threat India has ever faced. The countries already have some cooperation in the defence industry, including co-producing warships Turkey has sold Pakistan. Turkish President Recep Tayyip Erdogan recent outburst on Kashmir and open support to Pakistan on major international forums, corroborate and vindicate the concerns of India. The growing threat of terrorism as a result of this nexus is of serious worry to India.

Interestingly, Turkey is pushing to co-manufacturer warplanes and missiles with Pakistan. The growing bonhomie between Turkey and Pakistan cannot be ignored by the Indian authorities as the nexus between these two nations will provide them access to prized war technology from China.  Turkey is keen to develop and manufacture military hardware with Pakistan and bilateral dialogue is being held to build a consensus and framework to implement the idea. However, if defence experts are to be believed then the main objective of Turkey in developing strategic partnership with Pakistan is to secure access to China’s military technology. It is worth mentioning that China has been Pakistan’s main strategic benefactor for decades, helping Islamabad build fighter aircraft, missiles, warships, tanks and submarines.

If the deal with Pakistan materialises, then Turkey will get access to China’s military technology. Pakistan builds its JF-17 fighter jets with China and is said to have adapted Chinese designs for its Shaheen ballistic missile. Turkey sees nuclear power Pakistan as a strategically and potential partner in building its Siper long-range missile-defence project and TF-X fighter jet.

Meanwhile, Indian authorities are keenly watching the development taking place in the neighbourhood, which in turn has far-reaching ramifications for regional stability and security. Indian defence experts are keeping their fingers crossed over the next move by Turkey and Pakistan and mulling ways by which the threat can be countered.