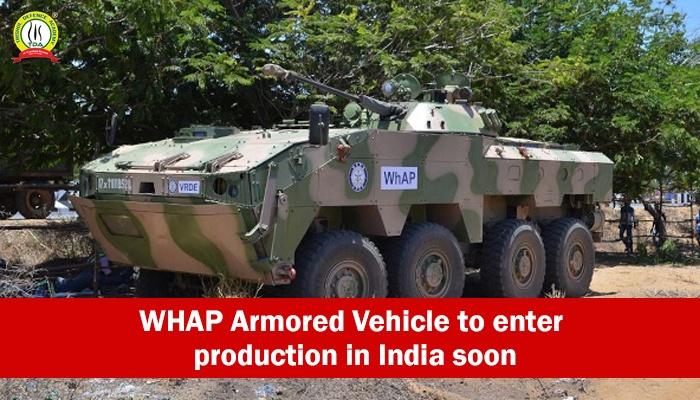 MUMBAI: TATA/DRDO Wheeled Armoured Platform (WhAP) is being recognized as India’s First Infantry Combat Vehicle. The vehicle has been designed sophisticatedly for optimized survivability, all-terrain performance, and improved lethality and needed for quick movement of troops. The vehicle has been meticulously tested to perform in adverse terrain and circumstances, including high altitude areas. It has the capacity to transport nearly a dozen personnel and utilized as a surveying vehicle, infantry carrier, or logistics carrier.

The major aim for developing WhAP and its rigorous testing is to ensure high mobility, firepower and safeguard the forces during their missions.

The WhAP with its BMP-2 turret offers a new generation of combat vehicle offering a high level of protection, mobility based on an 8×8 chassis, and firepower with the turret armed with a stabilized 30 mm cannon 2A42 and a 7.62 mm PKT coaxial machine gun mounted to the left of the main armament with 2,000 rounds. Mounted on the turret roof between the gunner’s and commander’s hatches is a launcher for an AT-4 Spigot or AT-5 Spandrel ATGM (Anti-Tank Guided Missile) which has a maximum range of 4,000m.

The WhAP has a weight of around 25 tons and is powered by 600 hp. diesel engine. The maximum speed can go up to 100 km/h. For amphibious operations, the WhAP is propelled in the water at a maximum speed of 10 km/h thanks to two hydro jets mounted at the rear of the vehicle.