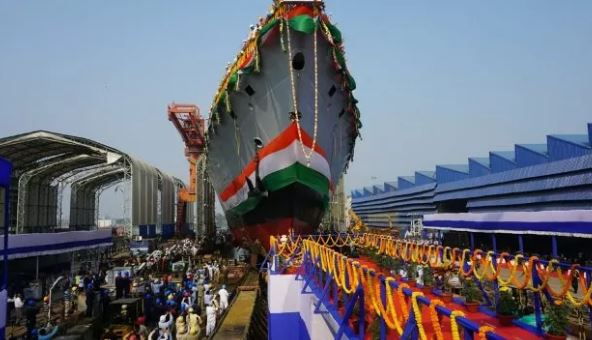 The Indian Navy’s power-boosting vessel ‘Himagiri’ joined the Navy on 14 December 2020. The first warship INS Himgiri, built by the Defense Sector Public Sector Gardenerich Shipbuilders and Engineers (GRSE) under Project 17A, was launched in Kolkata.

On this occasion, Chief Guest CDS General Bipin Rawat said that the strength and enhancement of the Indian Navy will further strengthen the defense preparations of the Himgiri Navy. The warship was launched at the GRSE yard on the banks of the Hooghly River by Madhulika Rawat, wife of Bipin Rawat.

After the launch, this state-of-the-art naval vessel will undergo extensive testing and after that it will be handed over to the Navy. According to the Indian Navy, under the 17A project, three such warships are being built, which even the enemy’s radar will not be able to track.

GRSE got the contract for the construction of the three warships under Project 17A for Rs 19,294 crore. The Navy hopes to get the first warship Himgiri in the year 2023, while two others will be handed over in 2024 and 2025.

The biggest feature of these three warships is that they will be equipped with missiles like Barak-8 missile and Hypersonic BrahMos.

These warships have a length of 149 meters and a weight capacity of about 6670 tons, while it will have a speed of 28 knots.

These multi-role P-17 warships with state-of-the-art automatic integrated weapon platform are going to give the Indian Navy an edge over the rest of the countries at sea.

The warship is completely indigenous and built under Make in India. These three warships must go through a long process before being included in the fleet. Even the enemy’s radar will not be able to track this warship.