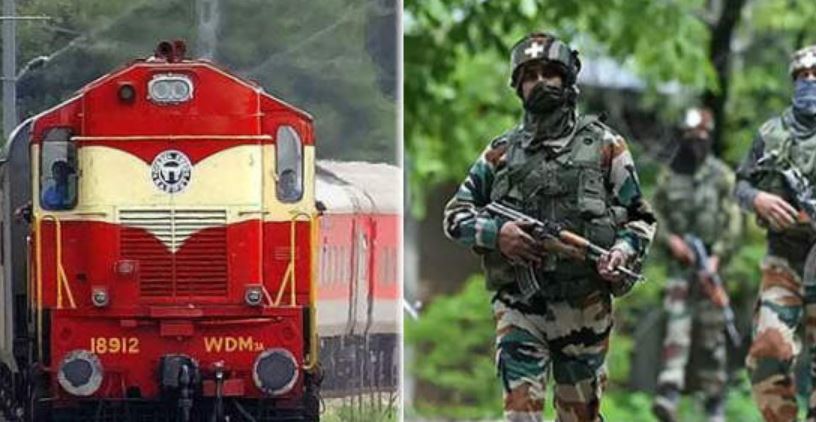 Many times when the number of soldiers is high, trains are used for movement instead of military vehicles. Because of which the Indian Army also takes full care of the soldiers who are called the pride of the country. A story related to this has come out from Jharkhand, where the railway ran the Rajdhani Express at maximum speed for the jawans.

Actually 100 soldiers from Ramgarh had to go to Delhi. The distance from Ramgarh to Ranchi is very much, in such a situation it was quite difficult to catch the train again. Baggage is also more with the seals. When the army officials saw the route of the Rajdhani train, they found Barkakana station nearby, but the movement of the soldiers from there was difficult. The reason for this was that the capital stayed only 5 minutes there. In 5 minutes 100 soldiers could not board the train with their luggage. For this, he contacted the Ranchi Rail Division and told him his problem.

The matter was related to the army, so it was necessary to stop the train in Barkakana for a long time, but if the capital stopped more than 5 minutes, there would be a problem in the operation of the railway. On this, railway officials got the idea that they cannot stop the train for much longer, but they can reach it quickly. He made a plan to increase the speed of the Rajdhani train and deliver it to Barkakana station 10 minutes before, so that the soldiers could climb easily.

After this, the railways ran the capital at maximum speed on Sunday. The time for his arrival at Barkakana was at 7.25 pm, but due to his ability, the railway delivered the train 17 minutes earlier at 7.08 pm. After this, the soldiers easily boarded the train with their luggage. Then the train left from there on its scheduled time. A loco inspector was also deployed to ensure that the loco pilot does not face any problem during maximum speed.

According to railway officials, on Sunday, the capital ran at a speed of 110 km to 90 km, it is said to be its maximum speed. On this sentence, the Railways tweeted and wrote that on the request of the Army, the Indian Railways drove the Rajdhani Express train at its maximum speed 17 minutes earlier, so that the soldiers and their luggage could get extra time to board. We understand the needs of our military forces and are always committed to fulfill them.