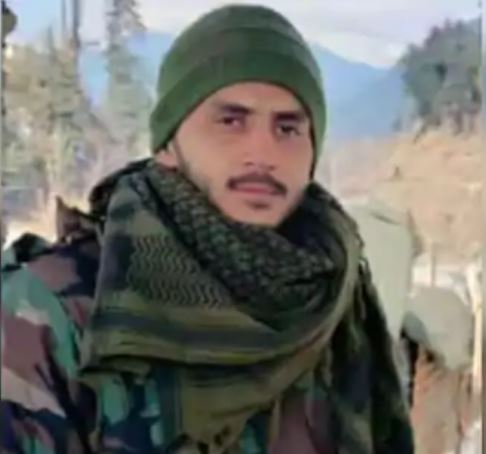 Just 19-year-old Jambaz Nikhil Dayma of Saidpur village in Bhiwadi district became a martyr in an encounter after a ceasefire violation by Pakistan in Uri sector of Jammu and Kashmir on Friday. Martyr Nikhil Dayma’s body will be brought from Kashmir to Delhi on Saturday. From there the martyr will be brought to his native village Saidpur. After that, he will be cremated in Saidpur with full military honours.

CM Ashok Gehlot tweeted that Nikhil has made the supreme sacrifice for the country. While paying tribute to the martyrdom of Jabanj Nikhil, Gehlot has prayed to God to provide support to his family members. CM has said that in this difficult time we all stand with the bereaved family.

According to the information, Nikhil Dayma, the country’s brave soldier who was the youngest martyr of Bhiwadi area, was admitted to 3 Rajput Regiment in April 2019. The cease-fire was violated by Pakistan on Friday. While giving a befitting reply to the Pakistanis, he laid down his life. Nikhil Dayma’s father is a taxi driver. Martyr’s younger brother Chandan Dayma is studying in Bhiwadi in class 10th.

Nikhil Dayma’s grandfather, the elder of the two brothers, is also retired from the army. Nikhil had chosen the Army to serve the country only after taking inspiration from him. In just a quarter to two years of service, he showed his bravery and laid down his life in the service of the country.

Nikhil Dayma finished his leave on 14 January and returned to the border to serve the country. As soon as the information about Nikhil Dayma was martyred, there was a wave of mourning in his native village Saidpur and Bhiwadi. Some family members have gone to Delhi.