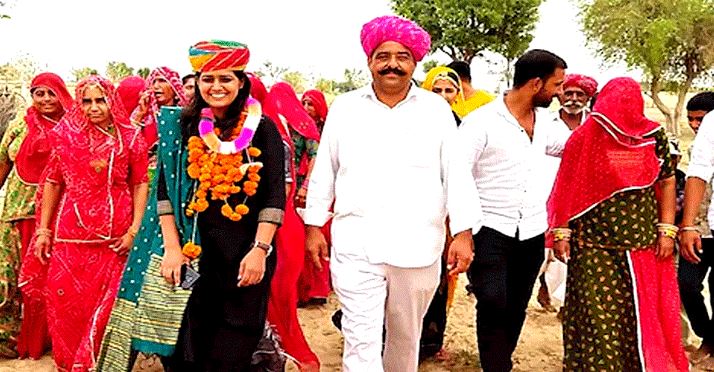 It is said that there are some parents in the society who do not understand the difference between sons and daughters. It is the desire of every parent that their children stand on their own feet and become an example in the society.

Kisturam and Ansi Devi are such fortunate parents, whose daughter Pyari Chaudhary has set an example in the society by becoming the first female lieutenant of western Rajasthan in the Indian Army.

Pyari is the sixth member from her family to join the Indian Army. After becoming a lieutenant in the Indian Army, on coming to their village for the first time, the villagers gave a rousing welcome to the beloved with Mangal songs.

Once upon a time, daughters were considered a curse in the border district of Western Rajasthan, but today these daughters are illuminating the name of the family and Barmer district and one of them is Pyari Chaudhary, who has been selected as a lieutenant in the Indian Army. Recently, after doing her training, she has returned to her village for the first time.

When Pyari Choudhary returned to the village for the first time, the villagers gave a rousing welcome to the daughter by singing the Marwari Mangal song in a desi style.

Pyaari Chaudhary told that his education was done in army schools. Father and family members were in the army, so I and my family wanted me to join the army and protect the country. This dream of mine has now come true.

Pyaari Chaudhary was selected for the lieutenant in the very first time, after obtaining the written examination merit at the All India level, passing the medical test including interview, to get commission in the army.

Pyari Chaudhary says that generally, daughters are tied in the bond of marriage at a young age, due to which there are many daughters whose dreams remain unfulfilled. I would like to tell those parents that daughters should be allowed to fulfill their dreams. Now my dream is that I will try my luck in civil services.