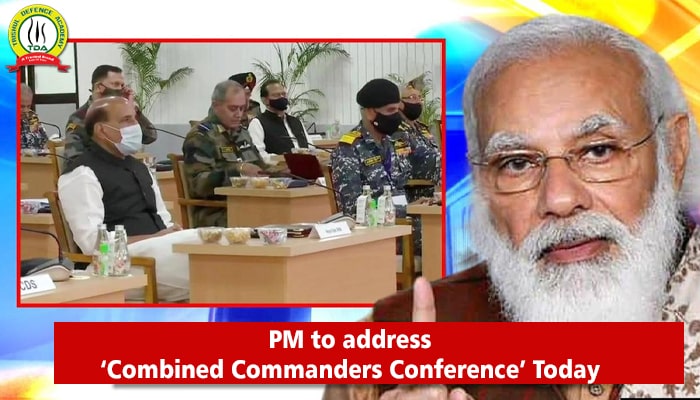 AHMEDABAD: Three days long Combined Commanders’ Conference is going on in Gujarat’s Kevadia, which will see the participation of Prime Minister Narendra Modi on Saturday with the aim of providing directions to the defence forces for sprucing up their preparedness and meet upcoming challenges.  During the event, the PM is expected to be intimated about the progress made in the creation of the theatre command. In a step towards restructuring the defence forces, the defence ministry would be creating the Air Defence Command.

The Defence Ministry has plans of creating the Air Defence, Maritime and Logistics command along with the area-specific commands comprising of elements from all three services. Along with a briefing on the progress made by the agencies created to handle warfare in cyber and space domains, the PM is also expected to be given an update on the restructuring of the Army formations in view of the recent Chinese aggression in the Ladakh sector.

Earlier, Chief of Defence Services (CDS), General Bipin Rawat laid stress on the complete overhaul of armed forces to remain relevant in the rapidly-changing geopolitical environment and gave a call for bringing major structural reforms. He claimed that India faces greater challenges than any other military across the world. “Structural reforms in higher defence and operational organisations are need of the hour,” he said.

Rawat stressed on the need for meticulous operational preparedness to counter rising threats from China and Pakistan. He even went to the extent of claiming that China is continuously looking for ways to establish dominance in our neighbourhood and the Indian Ocean Region. He also gave a call for optimum utilization of cutting edge technological tools to counter the threat.  “Some important steps that we need to take include defining the national security strategy, higher defence strategic guidance, and structural reforms in higher defence and operational organisations. Military power as an instrument of state policy needs to transform at various levels including ground strategic i.e. political-military, strategic operation and tactical level. Main dimensions of transformation are doctrine, post structure, technology, sustenance and readiness,” he added.