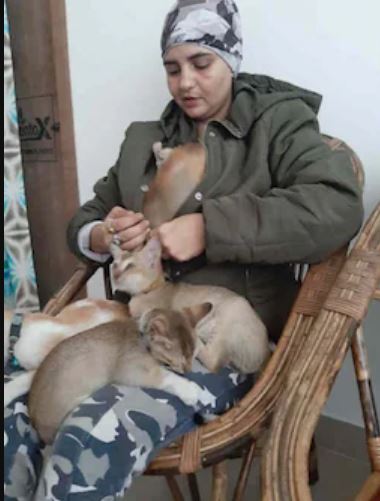 Prime Minister Narendra Modi has written a letter to Major Pramila Singh, a resident of Kota, Rajasthan and retired from the rank of Major from the Indian Army, for her kindness and service. During the lockdown of the Corona period, when people were busy arranging ration water in their homes, Major Pramila Singh along with her father Shyamveer Singh Rathod was engaged in the service of the helpless and destitute animals. Major Pramila and her father had arranged for food and treatment of stray animals roaming on the streets with their deposits.

Prime Minister Modi has described the efforts of Major Pramila Rathod as an inspiration for the society. The Prime Minister has written that in the last one and a half years, we have faced unprecedented situations firmly.

This is such a historical period that people will not be able to forget for the rest of their lives. This is a difficult period not only for humans but also for many living beings living in the proximity of humans. In such a situation, it is commendable for you to be sensitive to the pain and needs of destitute animals and to work with full capacity at the individual level for their welfare.

Along with this, Prime Minister Modi said in the letter that in this difficult time, many such examples have been seen which have given us an opportunity to be proud of humanity. PM Modi expressed hope that Major Pramila and her father will continue to inspire people with their actions by spreading awareness in the society with their initiatives in the same way.

Earlier, Major Pramila Singh had written a letter to the Prime Minister telling that the work of taking care of animals which she started at the time of lockdown is continuing till date. Expressing the pain of helpless animals in the letter, she appealed to more and more people of the society to come forward to help them.

Major Pramila Singh says that her father has been handling street dogs like children for the last 33 years. Wherever they see an injured animal, they try to treat it. Always keep food items in your car. Pramila tells that she stayed in Kota for 3 months during the Corona period.

Even when people were imprisoned in their homes, their father provided food for the animals after taking permission from the district administration. Many injured animals were treated. They spend 90% of their income for animals only. She is very happy to see the letter of appreciation sent by PM Modi.