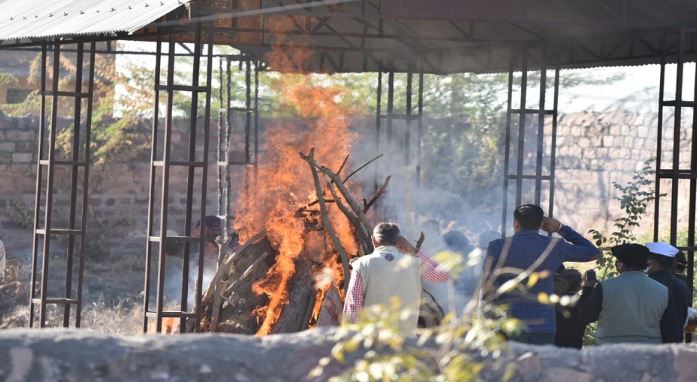 The body of Captain Ankit Gupta, the commander of the 10 Para Special Forces of the Indian Army got merged into panchtatva. His last rituals were done with full military honours on Wednesday afternoon in Digadi, adjoining the military area of ​​Jodhpur. Captain Ankit’s brother offered fire in the hot weather. About 15 of his family members were present on this occasion. A large number of people from the area shouted Bharat Mata and gave her a final farewell when they reached the cremation ground.

Captain Ankit died of drowning in Takhatsagar after jumping from a helicopter seven days ago in Takhatsagar in the city. His body could be taken out of Takhatsagar on Tuesday after six days. Captain Ankit’s family had expressed their desire for a funeral in Jodhpur itself. This morning his autopsy was done. After the post mortem, the mortal remains were taken to the headquarters of 10 para. There his fellow soldiers and officers gave him a final salute and left. During this, the family of Captain Ankit remained together continuously.

His body was taken to Digadi in a military vehicle from the headquarters of 10 Para. Army soldiers were at the cremation site. It did not allow any other civilian to enter inside except the family members, even the soldiers were stationed in the surrounding houses. At the same time, local Congress leader Ashok Chaudhary Warden attended the last ritual in the Jat Samaj’s cremation ground located in D cart of Jodhpur.

How much passion and love is there in the people towards the army, this was seen today in the funeral of Captain Ankit. A large number of young people from the area gathered before their last rites in Digadi village. They shouted with deafening slogans. At the same time, as soon as the corpse entered the village, they walked with him on long distances, cheering him on.