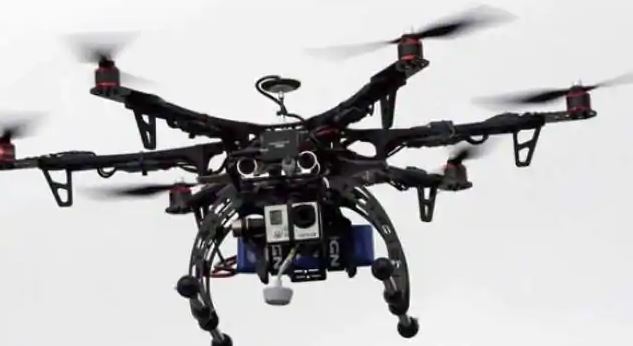 Recently, a suspected Pakistani drone was spotted in Arnia sector near the Indo-Pak International Border. As soon as the drone was sighted, the BSF jawans fired on this drone, but this drone disappeared in the dark of night. Now late on Wednesday night also a drone has been seen in Palanwala sector of Akhnoor. Both Arnia and Palanwala sectors come under Jammu district.

It is being told that a suspicious Pakistan Quadcopter was seen by the soldiers posted near Palanwala sector. This drone had entered 150 meters inside the Indian border near the LoC. The soldiers stationed on the border immediately targeted this drone and fired on it, but it could not be shot down. This drone immediately disappeared after entering the Pakistan border. Explain that such drones are used for border surveillance.

An official has informed that this incident happened on Wednesday night around 9.10 PM. After the sighting of this drone, the soldiers also searched the area but nothing was found there. Let us tell that the neighboring country Pakistan uses such drones to deliver drugs and money to its terrorists hiding in the border of Jammu and Kashmir, besides delivering weapons.

On Tuesday night, BSF personnel fired at a suspected Pakistani drone in Arnia, Jammu. Earlier on June 27, two blasts were carried out by drones at the Indian Air Force Station in Jammu. Two jawans were injured in these blasts. Since this incident, many such incidents of drone sighting have come to the fore at the military stations located at Kaluchak, Ratnuchak, Kanjuwani and Sunjuwan. There has also been talk of delivering arms, drugs, and money through drones to help Pakistan-backed terrorists in the border areas of Jammu and Kashmir.

However, now once again on Wednesday, the news of the drone hovering near the Indian Air Force station in Jammu has surfaced in many media reports. However, it has not been officially confirmed yet. An officer said on the condition of anonymity that ‘a white light was seen near the IAF by the soldiers deployed in security. It can be satellite or drone.