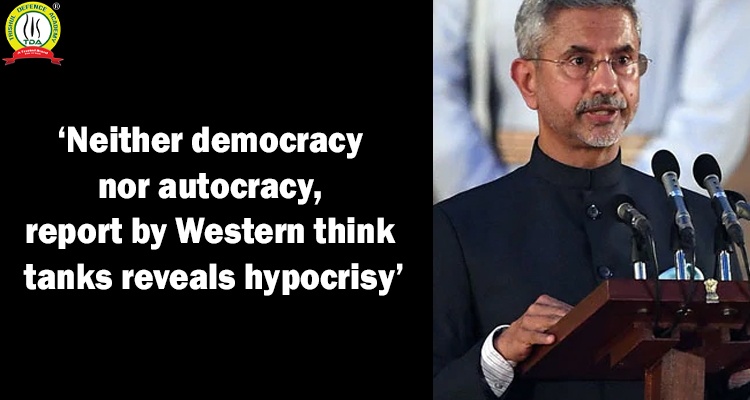 NEW DELHI: Unperturbed by adverse reports on India’s democracy, including civil liberties and minority rights by America’s Freedom House and Sweden’s V-Dem Institute,  India’s External Affairs Minister Subrahmanyam Jaishankar reacted angrily and claimed that these reports had nothing to do with democracy or autocracy, but speaks volumes about the hypocrisy of Western think tanks. “We don’t require a certificate from outsiders who are releasing reports that are based on certain specific agenda and aimed at satisfying their nefarious designs,” he retorted angrily.

“These self-appointed custodians of the world are upset with the idea that India is not seeking their nod. They keep on criticizing us but fail to play any role when the entire world was in danger. India has led from the front in delivering the COVID vaccine to several countries,” said India’s foreign minister.

It is worth mentioning that the annual report released by Freedom House, a US government-funded NGO that studies political freedom around the world has given thumbs down to India’s status as a democratic and free society. In another report V-Dem Institute, Sweden dubbed India as “electoral autocracy” under Modi’s leadership. Freedom House is a Washington-based non-profit, non-government organization that has been conducting research and advocacy on democracy, political freedom, and human rights since 1941. The status of India has been relegated from free to ‘partly free.’

Jaishankar has flayed US-based Freedom House as well Sweden’s Varieties of Democracies (V-Dem) Institute; both of them have given adverse reports over India’s worsening democracy parameters under Prime Minister Narendra Modi in separate reports released this month. The report on political rights and civil liberties, released by NGO Freedom House says ‘democracy is under siege in India.’ It went on to say that India “appears to have abandoned its potential to serve as a global democratic leader,” and added, “India’s fall from the upper ranks of free nations could have a particularly damaging impact on global democratic standards.”

The successive reports for 2018, 2019, and 2020 had ranked India as free, but the rank continues to witness a downslide with each passing year. The recent score of India is 67 on a scale of 100, down from 77 and 71 in 2020 and 2019 respectively. The report claims that there is growing pressure on human rights organizations, rising intimidation of academics and journalists, and a spate of bigoted attacks, including lynchings, aimed at minorities after Narendra Modi came to power in 2014. “India is faring low on democratic parameters with each passing year,” states the report.