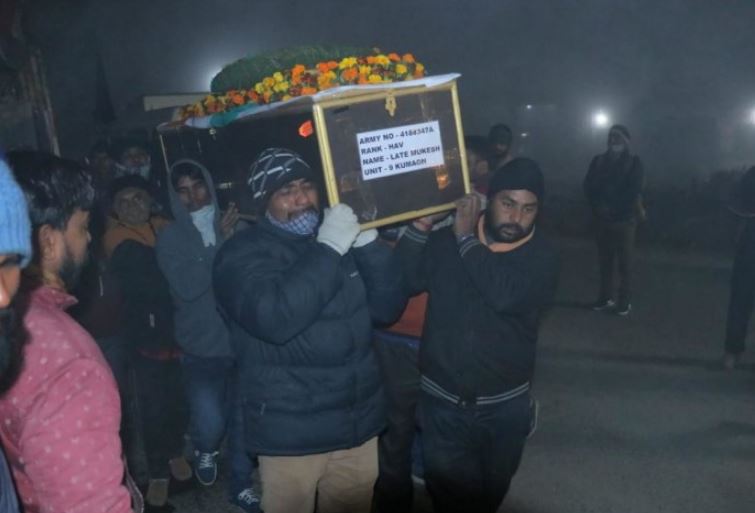 The mortal remains of Havaldar Mukesh Kumar of Kumaon Regiment, who was martyred in Arunachal, reached Kashipur at 5:30 am on Wednesday. The body of the martyr was taken to his Nandpur village.

There was chaos in the house as soon as the dead body arrived. Family members were in bad shape The cremation was performed with military honours at the crematorium ghat in the village itself after the family was given a final darshan of the body. The Army of Kashipur Hempur Depot saluted the martyr at the crematorium.

Hundreds of people rushed to his residence to pay homage to the martyr. Havildar Mukesh Kumar of Kumaon Regiment posted at Bomdila in Arunachal was martyred while on duty. Mukesh Kumar (38) son of village Gakkharpur of District Delari, District Moradabad (UP) Omprakash was a sergeant in the nine Kumaon regiments.

About 10 years ago, he started building a house in village Nandrampur in Kashipur. He also has his in-laws in this village. For three years, Mukesh was posted in Bomdila in Arunachal Pradesh. At around three o’clock on Sunday afternoon, the officers of the unit informed Mukesh’s elder son Vishal Kumar that your father’s condition was critical. About half an hour later the unit was informed of his father’s martyrdom. As soon as the information was received, weeds were destroyed in the village.

The deceased is survived by his wife Neelam and two sons Vishal (18) and Rishabh (15). Her brother Munesh Kumar has a private business in Ranikhet, while both sisters Babli and Kavita are married. Havildar Mukesh Kumar, who was martyred, was to retire on April 4, 2021.