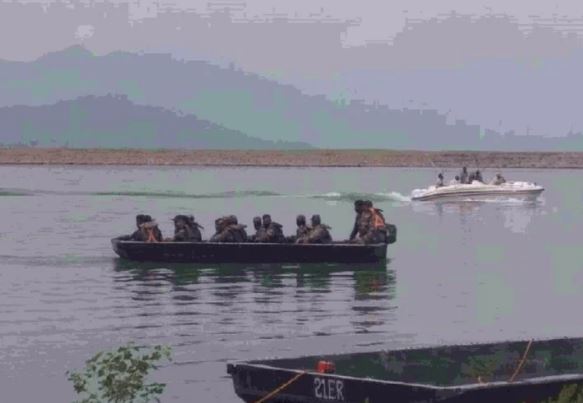 The search operation in the lake continued for the second day to trace the crew members of the helicopter that crashed into the Ranjit Sagar dam. Around 9 o’clock in the morning, the Marcos commandos (divers) of the Navy started the operation on Wednesday.

With this, the Special Forces of the Army took the front. From the part of the lake where the helicopter had landed, the divers kept diving throughout the day in the surrounding area. Nothing happened till late evening. On the other hand, special equipment has been ordered to descend into the depth of 510 feet deep Ranjit Sagar Lake. On Thursday, Marcos will search for the two missing even deeper.

The area where the helicopter crashed has been identified. However, the place could not be reached with the wreckage of the chopper being trapped at very deep depth and search for the pilots. Special equipment is needed for this. According to army sources, these equipments have been procured. Marcos will again conduct a search operation with the help of these equipment on Thursday.

According to sources, the pilot and co-pilot (Lt Col AS Bhatt and Captain Jayant Joshi) were present in the helicopter. The cause of the accident is not yet known. On the other hand, where the area was cordoned off since Tuesday evening, the siege in Purthu’s area has been increased even before the operation was started on Wednesday.

Amidst the siege, apart from officers and security forces, only members of the rescue team were allowed to enter the area. It is known that the Dhruv helicopter of the army, which was flying over the Ranjit Sagar lake, crashed and fell in the middle of the lake at around 10.45 am on Tuesday morning. He had taken off from Mamoon Cantt in Pathankot. Helmet, shoes and bag were recovered on Tuesday along with parts of the helicopter’s body.