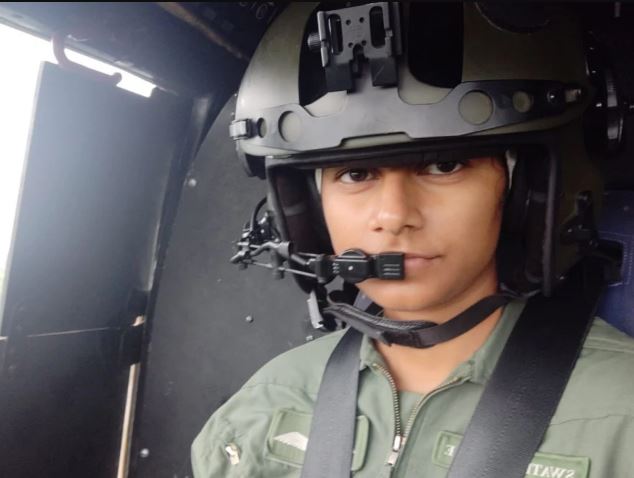 Recently, a film Gunjan Saxena was in the news. In it, the story of the girl who was struggling to become a pilot was shown. Such is the success story of Swati Rathore. Flight Lieutenant Swati Rathore in the Indian Air Force will lead the fly past to be held on Rajpath on Republic Day. This will be the first time in the history of Indian Republic Day when a woman pilot has got the responsibility of fly past.

Her parents living in Ajmer are very proud of this achievement of their daughter. Swati’s father, Dr. Bhawani Singh Rathore, posted as Deputy Director of Agriculture Department, says that he is proud of his daughter. The dream seen in childhood is getting fulfilled. Along with this, he has also appealed to all the parents that they should cooperate shoulder to shoulder, keeping their trust in the dreams of their daughters.

Born in a small village Prempura in Nagaur district of Rajasthan, Swati did her schooling in Ajmer. Meanwhile, while participating in a painting competition, Swati made a tricolour and put her dream in front of everyone. Swati’s parents left no stone unturned to fulfill that dream. After schooling, she got the NCC Air Wing to join while studying in college.

Swati’s dream was to become a pilot and in the first attempt, she was selected in the year 2014. Swati’s brother is in the merchant navy. On Swati’s achievement, mother Rajesh Kanwar says that she never made a difference between son and daughter. This is the reason that her daughter is going to create history today.

Union Water Power Minister Gajendra Singh Shekhawat has also congratulated Marudhara’s daughter on her success. Shekhawat wrote in his Facebook post that the celebration day of the Indian Republic is going to be very special for our Rajasthan this time. The place of female power has always been respected in the heroic stories of Indian society. Flight Lieutenant Swati Rathore is a living example of this achievement of our society.

This is a good picture of a changing India in the twenty-first century, which is working to remove the disorientation spread in society. Daughters are not inferior to sons in any case and from time to time, daughters have also proved it. On this achievement of Flight Lieutenant Swati Rathod, the land of heroes is also proud of Marudhara and wishes her bright future.