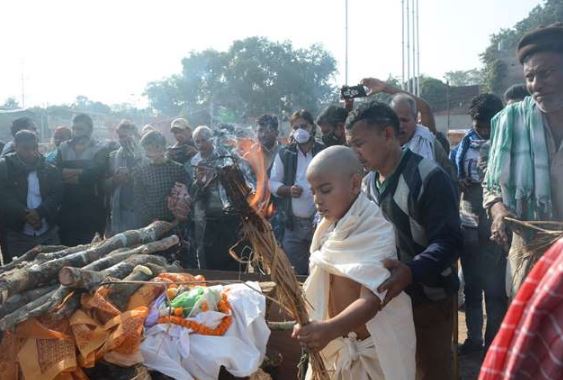 Soldier of Gaya martyr Narendra Pandey got final farewell at the Falgu river bank on Sunday. In his honour, Army soldiers bowed with guns and saluted. Thereafter the last rites were performed at the cremation ground. The body of the Shaheed was brought to Pandya Parshama, his native village medical station area, in the Wrap Army in the tricolour.

Where people and relatives saw the last According to the Corona guidelines, a very small number attended his last visit. The body which was wrapped in the tricolour was brought. The tricolour was assigned to the martyr’s wife. At that time the eyes of the people, including relatives, were moist. The martyr’s son offered to fire.

It was learned that Narendra Pandey, a poster hero, was employed in the Army in Allahabad, Uttar Pradesh. He died in hospital while undergoing treatment due to sudden health deterioration while on duty. It is being told that while on duty, the hero Narendra Pandey had a heart attack, where he was admitted to a hospital in Allahabad in a hurry by his companions. Where he died while undergoing treatment in ICU.

The family came to know about death. The family members were miserable crying. His body was brought to Pandey Parswan of Magadha Medical, the ancestral village of Gaya. Several Army officers also attended the occasion.

Nayak Surendra Kumar, a friend of Nayak Narendra Pandey, said that he was a very good man, he died during treatment due to ill health while on duty. At the moment, which disease has caused his death, it is also not clear. It will be clear only after the post mortem report comes.

Manish Kumar Mishra, the brother-in-law of the deceased, said that in 2003 he contributed to the army. There was a transfer from Kashmir to Allahabad only 1 year ago. He has a daughter and a son. Army personnel from Allahabad have brought Gaya from their car, and have been brought to the crematorium in Gaya OTA. The villagers have demanded that 25 lakh will be given to the dependent on martyrdom. All the benefits given by the state government and the central government should be given.

At the cremation ground, LJP District President Birendra Singh said that a school and a gate should be constructed in Pandey Parswan village in the name of Shaheed Narendra Pandey. Along with this, the Central and State Government should arrange for the martyr’s wife a job, an education for an ignorant child and a living.tr