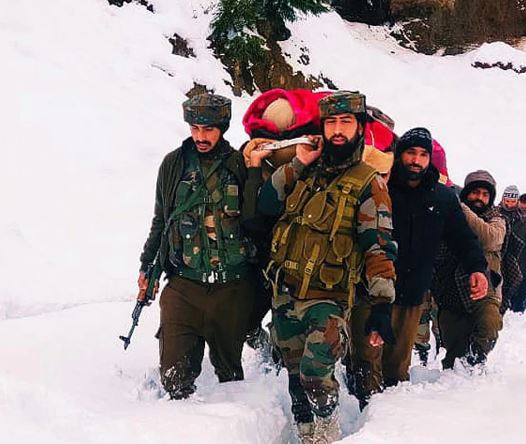 Heavy snowfall in Kashmir has become an issue for the people. In such a situation, Army soldiers have been ahead to help the local people. One such incident has come to light in Kupwara where the soldiers of the Indian army have come out as angels for a pregnant woman.

In fact, two days ago in a remote village of Kupwara, a pregnant woman was escorted by the soldiers of the knee to the knee two kilometres in deep snow, from where the woman was taken to hospital by ambulance. After the help of the soldiers, the woman has given birth to a healthy son.

On the night of 5 January, 11.30, when Manzoor Ahmad Sheikh of Farkian village came to know that his wife Shabnam Begum started hurting, there was no way for her to go to the hospital. Because all the roads were closed due to snow and it was also necessary to take the pregnant wife to the hospital.

Meanwhile, the news was also given to the Karalpura hospital and from there the ambulance reached the way. After which the woman was further sent to hospital by ambulance and the woman gave birth to a healthy son.