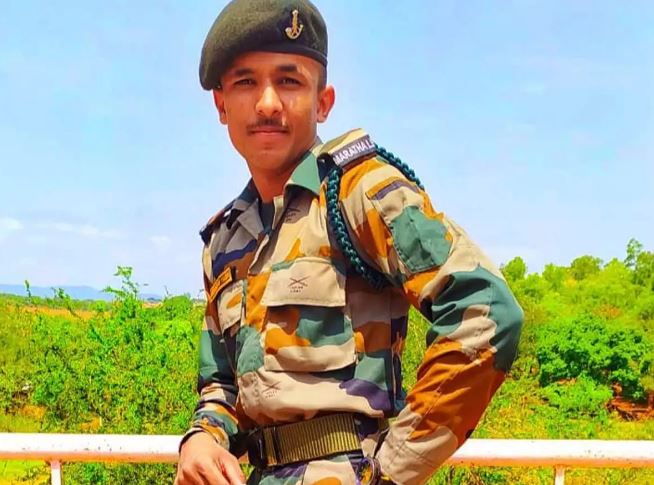 Soldier Yash Deshmukh, resident of Pimpal Village in Jalgaon district got martyred in a terrorist attack in the Kashmir Valley. However, a few hours before the encounter with the terrorists, he spoke to his friend.

Now that he is not in this world, his last WhatsApp chat is going viral. Their chat is in their native language Marathi. As soon as his last chat on social media went viral, anyone who read it had tears in his eyes.

Friend asked- How are you brother ?  The young man replied- I am fine. But who can say what about the soldiers? They will live today, may or may not live tomorrow.

21-year-old Yash Digambar Deshmukh, who was martyred in the Srinagar terror attack, was cremated with state honors at Pimpal village in his native district Jalgaon on 28 November 2020. People gathered to gather for their last visit. Everyone bid farewell to Yash with tearful eyes. Yash was posted in the Maratha Regiment, who was martyred in indiscriminate firing by three terrorists.

His body was brought to Nashik by special plane on Friday night. He was then brought to his village Pimplegaon in Chalisgaon at 9 am on Saturday. Yash Deshmukh’s body was kept at his home for a final visit.

Yash was given a final farewell with full state honours. The soldiers wrapped the tricolour around his body and placed the body on his terrestrial vehicle. The body was then taken for the last rites. On the occasion, Guardian Minister Gulabrao Patil of the district, Agriculture Minister Dada Bhuse and former soldiers garlanded and paid tribute to him.

Yash Deshmukh was also honoured by the Army and Jalgaon District Police after four rounds of firing. His body was cremated by his brother Pankaj Deshmukh. Minister Dada Base said that the family of Shaheed Veer Jawan Deshmukh will provide assistance of up to one crore rupees from the Maharashtra government. Mangesh Chavan assured that he will try his best to make Veer Yash a memorial in the village.