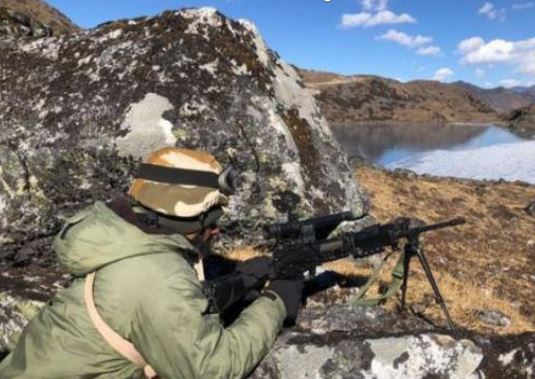 Tensions still remain between India and China at the borders. The snowfall in the mountainous areas has certainly created problems for the army, but the Indian Army soldiers are standing firm. In East Ladakh, the jawans are not only to protect the border but in Arunachal Pradesh too, India has tightened security on its borders. The ITBP stationed in Tawang says that their jawans are stationed there in high mode.

China will not be able to carry out any nefarious activities there. The team of the news agency ANI visited the Tawang area from where the Troops of China can also be seen clearly. The team reviewed the high level preparations by the ITBP soldiers present there. It has been told in the report that security is tight and construction work is being done at a fast pace.

ITBP’s 55 Battalion Commander Commandant IB Jha told ANI, “When incidents like this happen (to be aggressive by the Chinese Army in East Ladakh), we have to be on high alert mode so that such unforeseen incidents do not happen and here Nothing is surprising, as you can see that there are extreme cold conditions that make things difficult, but our jawans are much more vigilant and keep an eye on the deadline all the time. ”

“No one can surprise us. We have committed to protect the country and we are fulfilling our duties and maintaining high level of preparedness,” the official said. The ITBP has played an important role in the ongoing conflict with Chinese troops with both LAC in eastern Ladakh and Arunachal Pradesh.

In the initial violent skirmishes, the ITBP had encountered a number of difficult situations with Chinese troops at Pangong Lake, the Finger area, and at patrolling points in 14,15, 17 and 17A. During the scuffle, the soldiers not only prevented the Chinese side from advancing, but also pushed the Chinese side back and caused them serious injury. Commandant Jha said that the bravery shown by ITBP troops in early April with China in the April-May time frame has highly motivated the troops stationed in the Arunachal region.

The ITBP officer said that the preparations made by them during the year would ensure that they too could do so when the time comes. In traveling to further locations near the LAC, the ANI team reached very close to the zero point, from where Chinese roads can be seen, which are used for vehicles coming into Indian territory. Showing the patrolling carried out by ITBP soldiers in that area, Commandant Jha said that the infrastructure development by the Indian side over the years now allows Indian troops to move too close to the last point or zero point on the LAC. .

Commandant Jha says, “Whether it is clothes or construction work, we have done a lot of work in this regard in recent times. As you can see our vehicles can go to the end point, it makes us not tired Helps respond to situations. ” Tawang Sector is one of the most sensitive areas in the Northeast on the LAC and in the 1962 war, the Chinese managed to penetrate deep into Indian territories from that time.