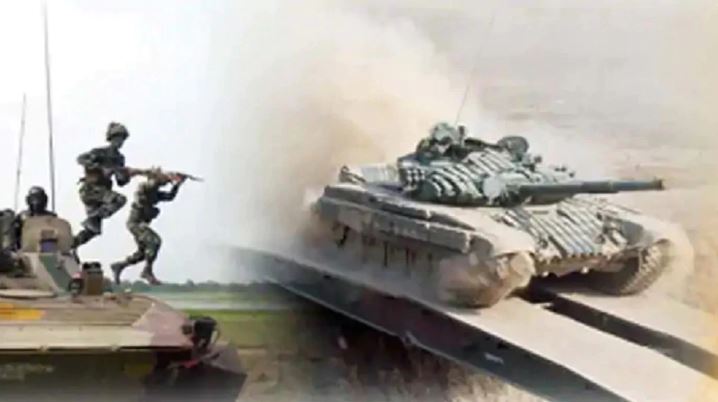 Joint manoeuvres are continuing between Indo-US forces at Mahajan Field Firing Range of Bikaner, Asia’s largest field firing range. In this 15-day exercise here, the armies of both countries are jointly demonstrating the battle skills and sharing the technique of joint fight against terrorism on the sandy thrusts of the field firing range.

Mahajan’s field firing range, situated amidst the sandy ridges of the desert, is shaking these days with the power of the army. At the same time, the soldiers have been standing in the battleground against the terrorists for the last several days. In such a situation, joint operations are being conducted between the Indo-US Army from today in Mahajan Field Firing Range of Bikaner, in which the armies of the countries are displaying battle skills jointly. Along with this, the training is being done by sharing information about each other’s weapons with the old and state-of-the-art system taken by both the countries.

A parade march was carried out by the soldiers of both countries on the occasion of the opening ceremony of the joint exercise between the Indian and US forces, which started from 8 February at Mahajan Field Firing Range. US Army Commander Colonel J Bodwell and Indian Army Brigadier Mukesh Bhanwala took the salute of the parade and duly launched the joint exercise by blowing up the balloon.

During this, both military officers jointly called it necessary to destroy attacks like terrorism and cyber-attack jointly. During this, condolences were also expressed by the USA Army regarding the Uttarakhand tragedy.

According to the information, this is the sixteenth edition of the US and India of this exercise ‘Exercise Exercise-20’, which began in 2004, a series of Indo-US bilateral exercises. This bilateral war exercise is going to focus on the Counter-Terrorism Operation in the backdrop of the desert region. During the exercise, participants are engaging in missions from joint planning, operations, joint tactical exercises and interacting with each other in the professional affairs of field commanders and soldiers to make this exercise a success.

This war exercise, organized after the Corona period, is one of the largest military training and defence cooperation efforts between India and the United States. This joint exercise is another step in the growing military cooperation between the two countries. Both India and the United States understand the threat of terrorism and in view of this, stand shoulder to shoulder in combating this.

Modern weapons of the armies of both countries were also demonstrated during the ceremony. The soldiers of both countries got acquainted with each other’s modern weapons and the technique of operating these weapons was also shared among themselves. This is the 16th edition of the joint exercise between the soldiers of the two countries. In this exercise, the Indian Army is represented by the 11th Battalion of Sapt Shakti Command, Jammu and Kashmir Rifles.

At the same time, the US Army is being represented by soldiers of 2 Infantry Battalion, 3 Infantry Regiment, 1-2 Striker Brigade Combat Team. Here, Defense PRO Lt Col Amitabh Sharma said that this exercise will be focused on anti-terrorism operations. The objective of this exercise is to increase the practice and strategic best practices, cooperation and coordination between the two armies at the strategic level.

The USA Army’s PRO Major Sensor Garrison said that this manoeuvre, which is happening in better harmony between the world’s two great and courageous armies, will prove to be very important in the fight against terrorism. During this time, the soldiers who came from America were not only introduced to the fort Havelis and culture of Rajasthan.

At the same time, both the Indian Army and the US Army offered prayers to Maa Saraswati on the occasion of Basant Panchami, Indian soldiers introduced the American Army soldiers to their Indian culture, while the US Army was overwhelmed by seeing this culture and culture on the occasion of Basant Panchami. But a pleasant atmosphere was seen in the Mahajan field firing range.

After the puja, the soldiers of both the army enjoyed kite flying fiercely. Indian and US Army soldiers took the door pulley in their hands and made their kites walk in the sky, as well as the same spirit in cutting each other’s kites, which is in them while eliminating the enemy.

Indian soldiers also tried to make a place in the heart of the US Army with their culture, so the same American army did not miss to express its happiness after seeing so much love. After kite flying, the US Army was put on a desert ship Camel. Female soldiers of the US Army also enjoyed a lot, as well as to make the atmosphere happy, the US Army along with the Indian forces on the Punjabi songs also gave a heavy dance.

The USA Army’s PRO Major Spencer Garrison said that the ongoing manoeuvres between the two countries provided an opportunity to share each other’s warfare techniques as well as each other’s culture.