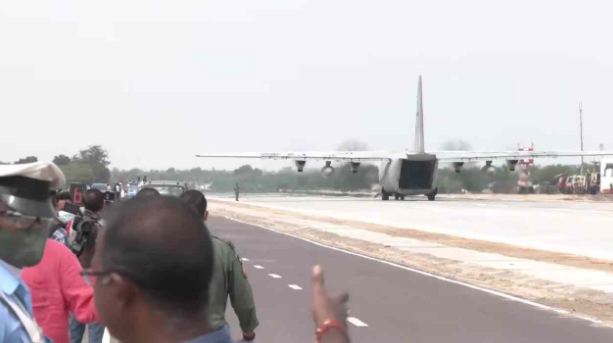 In this program, Defense Minister Rajnath Singh said that this airstrip is at some distance from the Pakistan border, it proves that India is always ready for any challenge. three km. This long stretch has been prepared in 19 months, he said that even during the Corona period it has been prepared. He said that in such a situation, the construction of this emergency landing field also creates enthusiasm in the mind and also a confidence towards safety. That’s why today is a special day for all of us.

Chief of Defense Staff General Bipin Rawat also witnessed the landing demonstration at the Emergency Field Landing on the National Highway in Jalore, Rajasthan. At the same time, the office of Union Defense Minister Rajnath Singh had posted on Twitter on Wednesday and informed that the Defense Minister will visit Barmer and Jaisalmer in Rajasthan today i.e. on Thursday.

Apart from this, Rajnath Singh will review the operations, participate in the MRSAM induction function and will also interact with the Air Force personnel posted in Jaisalmer. This is the first time that an emergency landing of IAF aircraft has been made using a National Highway (NH-925).

The National Highways Authority of India (NHAI) has developed a 3 km stretch of the Satta-Gandhav section of NH-925A as an Emergency Landing Facility (ELF) for the IAF. It is part of the newly developed two-lane paved shoulder of Gagaria-Bakhsar and Satta-Gandhav section, which has a total length of 196.97 km. Under Bharatmala project, the cost of this project will be Rs.765.52 crore. It has been prepared in 19 months and all types of Air Force aircraft can land on it.

Apart from this, three helipads have also been prepared. Defense Minister and Road Transport Minister will also inaugurate this highway. It will also be able to be used for landing Air Force fighter aircraft during war. The reason is that during the war, most of the enemy destroys the air base of the Air Force, in such a situation this airstrip proves to be very effective for the Air Force aircraft. Not only in Barmer but also in Jaisalmer, Jodhpur.