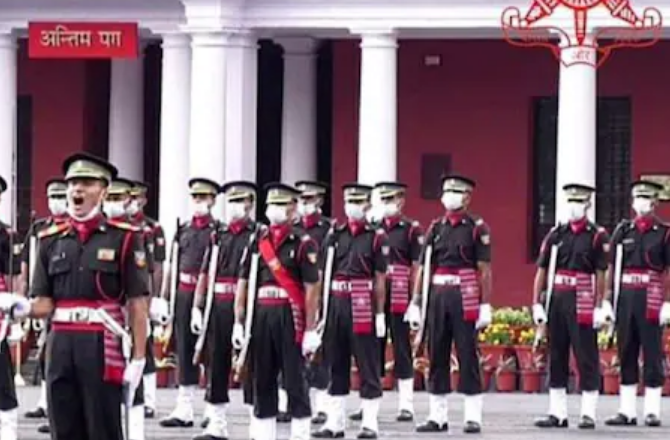 Training during the Covid epidemic may have presented many challenges, but with protocol, the IMA continued to complete its training. Saturday was a historic day for the IMA when 425 Gentleman Cadets took the last step as officers and took a vow to serve the nation. In this, 84 foreign cadets from 9 countries also became officers.

Lt Gen RP Singh, PVSM, AVSM, VSM, GOC-in-C, HQ Western Comd inspected the parade. Due to the prevailing COVID situation, the parents and family members of the passing out Gentlemen Cadets could not attend the function. The piping ceremony, which is traditionally performed by the parents of the passing out course, was done this time by the instructor staff posted at the IMA. After crossing the last step in the passing out parade at the Indian Military Academy, a group of 341 young officers became an integral part of the Indian Army by taking the oath of death on the country.

The parade began at Drill Square in front of the historic Chetwood building. The General Officer Commanding of the Army’s South-Western Command, Lt. General RP Singh inspected the parade as a reviewing officer and took the salute from the nearby Gentlemen Cadets. Deputy Commandant Jagjit Singh, Commandant Harinder Singh took the salute of the parade, after which Lt.

General RP Singh reached the parade venue and took the salute of the parade. Take it General Singh honored the cadets with overall best performance and other outstanding honours. Mukesh Kumar got the Sword of Honour, while Deepak Singh got the Gold, Mukesh Kumar got the Silver and Lavneet Singh got the Bronze. Daksha Kumar Pant won the Silver Medal (TG). Kinley Norbu adjudged best foreign cadet.

The Chief of Army Staff banner was received by the Dograi Company. After the Peeping and Oath Ceremony held after the parade, 425 Gentlemen Cadets became an integral part of the army of the country and abroad as lieutenants. Of these, 341 young military officers were found by the Indian Army.