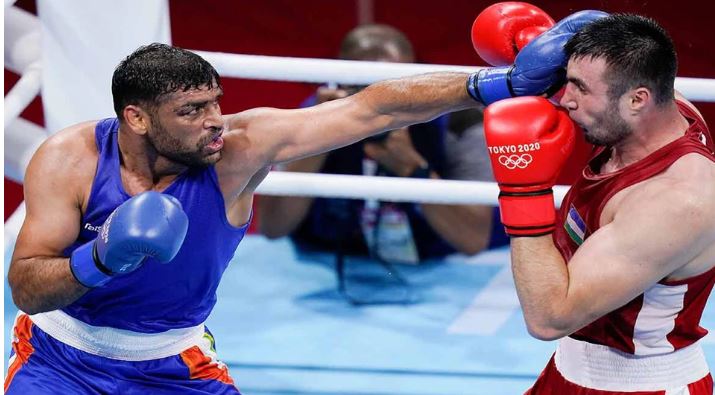 India’s efforts to win another medal in the Tokyo Olympics have suffered a setback. Actually Indian boxer Major Subedar Satish Kumar lost in the quarterfinals. In the quarterfinals, Uzbekistan’s boxer Bakhodir Jalolov defeated him by a margin of 5-0. However, despite his defeat, Satish Kumar has won the hearts of everyone with his passion.

In fact, even after several cuts on his face, Satish continued to fight and his rival Bakhodir Jalolov has also praised this spirit of Satish for not giving up. Bakhodir tweeted after the match, calling Satish Kumar a true warrior.

In a conversation with PTI, Satish Kumar told that his wife did not want him to play the quarterfinal match. The reason for this was the injury of Satish. Satish told that even his father was not in favor of it. Satish said that despite this, he wanted him to enter the competition and give his best. According to Satish, he did not want to live the rest of his life with the regret that he did not enter the contest.

Satish told that ‘his children also saw his match on TV and hopefully they must have felt proud’. Let us inform that Uzbekistan boxer Bakhodir Jalolov, who defeated Satish in the quarterfinals, also praised Satish and tweeted his picture, calling him a true warrior. Even after the match Bakhodir hugged Satish warmly.

If we talk about the achievements of Satish Kumar, he has won the bronze medal twice in the Asian Games. He is also a silver medalist in Commonwealth Games and multiple times winner of National Championship. He is the first heavyweight boxer in the country to not only qualify for the Olympics but also reach the quarterfinals.