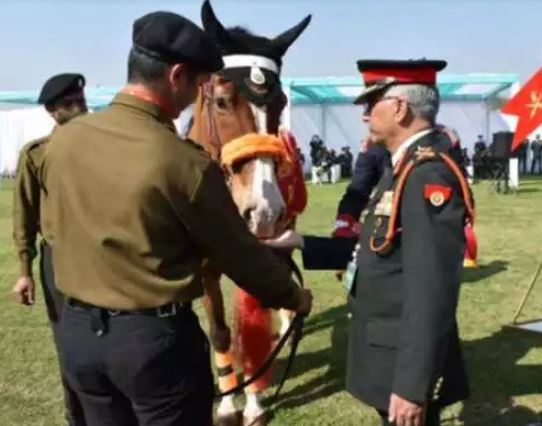 Rio, the 61-cavalry horse of the Indian Army, has received the Chief of Army Staff Commandation. Rio was awarded this honor for her services. This time when Rio joined the Republic Day Parade, it was Rio’s 18th Republic Day Parade. Rio was honored by the Chief of the Indian Army, MM Narwane at the Cariappa Parade Ground in Delhi. The Army Chief also gave Ryo a carrot and jaggery along with the commutation card.

Rio became the first horse of the Indian Army to receive this honor. The Rio is in the 61 cavalry of the Indian Army, the only functional horse regiment in the world. Rio took part in the Republic Day parade for the first time when she was four years old. For the last 16 years, Rio has been the constant charge of the squad commander, that is, the commander leads the squad on board.

A 61 cavalry official said that Rio is very special. When the commander gives a command, Ryo listens carefully and follows it. Horses usually retire from the horse regiment at the age of 20, but Rio is 22 years old and is still serving. The 61 Cavalry in the Indian Army was formed on 1 August 1953. It was then formed by combining the force of six states. It is currently the only serving horse regiment in the world, not just of the Indian Army.

In 1965 India Cavalry, 61 cavalries were deployed in the Ganganagar sector of Rajasthan. The regiment had responsibility for an area of ​​over 100 km. There was not a single intrusion from there. During the 1971 war, the responsibility of the regiment was the security of Rashtrapati Bhavan. The 61 Cavalry Regiment also contributed to Operation Pawan in 1989, Operation Rakshak in 1990, Kargil War in 1999 and Operation Parakram in 2001–2002.