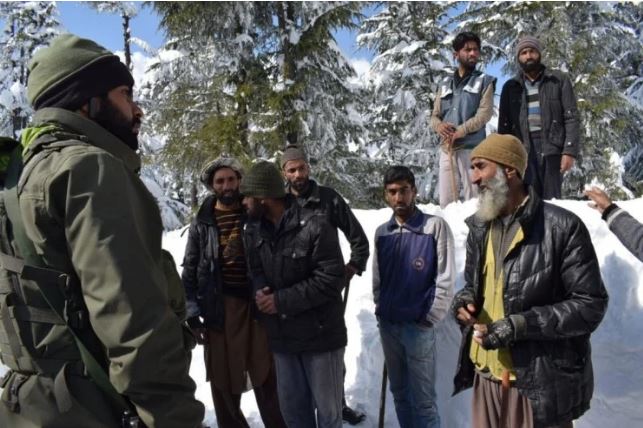 According to the information, Bakkarwal was going from Dera Kathua to Nawapachi village of Madhwa tehsil of Kishtwar. During this time he got stuck in the snow. After this, Bakkarwal Bashir Ahmed called the Army Gujjar Bakkarwal Check Post at Bhandarkot on May 15 and asked for help. Told that he is stranded with his wife, three children and cattle due to lack of food in the snow. Military officials immediately informed the relief party Chingam Post, from where a relief team started searching for the family, picking up items on the shoulder amid the bad weather.

After 24 hours of walking, the family was found late Sunday evening at a height of 11 thousand feet. After this, food, medicines and essential goods were provided to them. Bakkarwal Bashir Ahmed thanked the army for the help and said that his dera visits the Madhwa Valley every year. Whenever they are needed, the army immediately reaches for help. These days many Bakkarwal migrate towards the mountainous areas due to the heat. This time due to heavy snow on the Sinthan top, Bakkarwalas are facing a problem. The military officer says that the Bakkarwal family had a mobile, which saved the family from untoward incident.

DDC member Madhwa Mohammad Zafarullah has raised the demand from the district administration for the early opening of the Synthtop route, to help the people of Madhwa and Vadavan to reach Kishtwar town with ease. He said that many people are upset due to getting sick. The route which opened in March has not been opened in May also. Although the work to open the route from NHIDSL started at the end of February, but there are problems with repeated snowfall. In this regard, DC Ashok Kumar Sharma said that due to shortage of laborers, it is not possible to smooth the route. There is a lot of repair needed at many places on this route, which may take a long time.