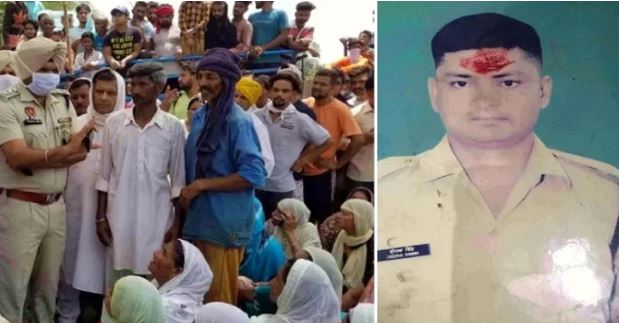 An Indian Army jawan was beaten to death on suspicion of theft. The incident is from a Gurdwara located in Gurdaspur, Punjab. According to reports, Deepak Singh, a resident of Pathankot, had gone to the Gurudwara to drink water.

But the manager of the Gurudwara and his associates mistook him as a thief and beat him mercilessly. Deepak was admitted to the hospital in critical condition where he died. Deepak was posted in Arunachal Pradesh and was returning home after 6 months.

The incident took place near Gurdwara Lal Singh Kulli Wale of Mukerian Chowk on the Gurdaspur-Pathankot National Highway in Punjab. Onkar Singh, father of the deceased Deepak Singh, a resident of Lahi in Pathankot, said that one of his three sons, Deepak, was posted in the Indian Army Griff in Arunachal Pradesh. On Wednesday (30 June 2021), Deepak was going to his home on leave. He told that after landing at Amritsar airport, Deepak sat in the bus to come to Pathankot, but accidentally landed at Kahnuwan Chowk.

Onkar told that at about quarter past one in the night, Deepak’s call came. According to Omkar, Deepak told him that some people have surrounded him on the suspicion of theft in the Gurudwara and are beating him up. After this Omkar lost contact with Deepak. Onkar came to Gurdaspur looking for his son Deepak where he got information about Deepak’s death on a call from the Death House of the Civil Hospital.

Actually, after landing at the wrong place, Deepak Singh was thirsty, due to which he went to the nearby Gurdwara Lal Singh Kulli Wale to drink water. During this some people surrounded him and beat him mercilessly on suspicion of theft. The police somehow rescued Deepak from those people and admitted him to the hospital where Deepak died.

According to media reports, the police had initially registered a case of culpable homicide not amounting to murder. Angered by this, the relatives and villagers put Deepak’s body on the Pathankot-Amritsar National Highway and created a ruckus. After this Gurdaspur police registered a case of murder against two persons. A case has been registered against Gurdwara’s manager Gurjit Singh and his accomplice Dalbir Singh Phara in this case.