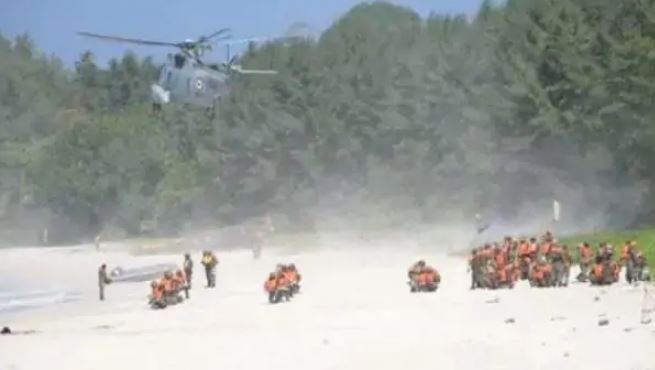 Indian Army conducted a training exercise on Monday at Andaman and Nicobar near the Bay of Bengal to improve its combat capabilities. This joint trial was named Kavach. Which included all three armies of India. The news agency ANI reported that the forces also drilled AMPHEX-21 in this training.

This training took place under the Andaman and Nicobar Command. Explain that the training program was done with the participation of Eastern Naval Command and Southern Command, which included Indian Army, Indian Navy, Indian Air Force and Coast Guard.

ANI quoted the Ministry of Defense as saying that the training included all the forces of the Andaman and Nicobar Command, elements of the amphibious brigade of the Southern Command of the Army. In addition, the Navy and Marine Commando’s corvette, submarine and amphibious landing ships, the Indian Air Force’s Jaguar Maritime Strike and transport aircraft were part of this training exercise.

The purpose of this trio service drill was to speed up the operational co-operation of the three armies by incorporating elements of fighter jets, aircraft transports, helicopters, warships, infantry fighting vehicles and special forces.

The exercise included a number of uses such as maritime surveillance property monitoring, air and sea strikes, air defence, submarine and landing operations. According to the ministry, the scope of the drill will cover joint intelligence, surveillance (ISR) functions that include military-technical, electronic and human intelligence elements.

This training exercise took place at a time when India’s relations with China are not going well. The situation on the border is not good, apart from this, the Indian Navy has also increased its surveillance to monitor the movements of China in the Indian Ocean.