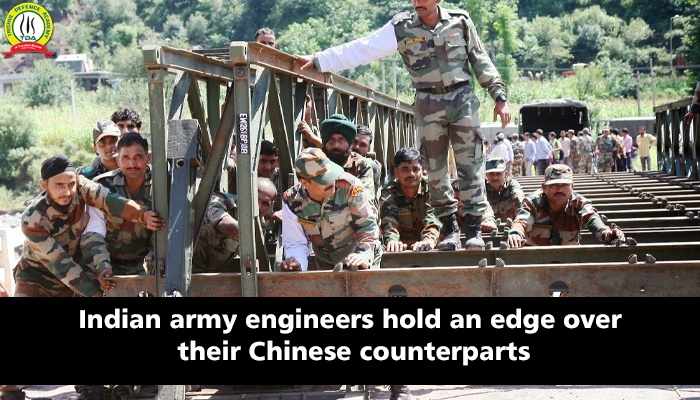 BENGALURU: “Indian Army engineers hold an edge over their Chinese counterparts in terms of capability, expertise and skills, but a shortage of funds hampers their zeal and ability to think out-of-the-box ideas,” said Army veterans during a free-wheeling discussion with a panel of young researchers. The discussion was organised by Defence Research and Studies (DRaS). Addressing the gathering, Lt Gen Gautam Banerjee, PVSM, AVSM, YSM (Retd) said, “Indian Army engineers are skilled and far more superior to their Chinese counterparts but fail to make headway in the absence of funds. The People’s Liberation Army (PLA) invests heavily in infrastructure building. The defence budget allocated to the Indian Armed forces is meagre when compared with that of China. Low fund allocation hampers research activities of supporting arms including the corps of engineers.” Commenting on the recent stand-off with China, he said, “The Chinese have pre-planned for the border scenarios and unforeseen events, which enables them to bridge the infrastructure gaps sans any hiccups. The standoff with China has brought focus on building infrastructure along the border. Lack of infrastructure mar our preparedness for a long-lasting stand-off in the harsh terrain and adverse weather conditions. There is an urgent required for improved road connectivity, shelters and huts equipped with basic heating arrangements, water and electricity supply, and field defences to protect the troops on the heights.” Divya Malhotra, a researcher came down heavily on the knee-jerk reaction by the authorities towards the need of building infrastructure along the border when our aggressive neighbours are posing a serious security threat on two fronts.