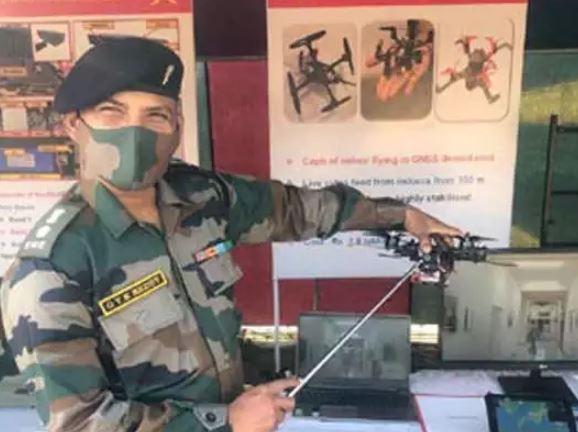 Indian Army is preparing many such devices to meet its operational needs as well as to reduce its dependence on foreign systems, under the Make in India, many Indian Army personnel and officers are doing many innovations. The Indian Army has prepared a microcopter that can enter any building and give a live feed of the terrorist to the operator 100 meters away. A copter jamming system has also been created by which the enemy’s copter can be dropped down by sitting inside the bunker.

The Indian Army has designed and developed a microcopter that can be helpful to the army in counter-emergency and counter-terrorism operations. If the terrorists are hiding in a building and the army has to go in there then it is very risky for any soldier to go inside because the terrorists are hiding in the building and from where they can attack.

In such a situation, if a microcopter is sent inside the building, it keeps giving the live feed inside the operator at a distance of 100 meters. This microcopter can overcome all obstacles and can remain in flight continuously for 20 minutes. It runs from the battery. It can also fly in GPS denied mode, which means that it can be more secure due to not being connected to GPS. It is currently in the development stage and its third prototype is ready. The cost to build a microcopter is about 1.8 lakh rupees.

Lieutenant Colonel Ajit Yadav of the Indian Army has designed the Enhance copter jamming system. Its range is about 3 kilometres. It can be remotely controlled by sitting inside the bunker. The equipment already owned by the army has been prepared using it so that the expenditure is reduced. In this, you can detect the micropcopter through thermal imager and track it through remote control.

As soon as the signal jammer is turned on, the signal of the copter becomes jammed and it comes down. Any copter is connected with its base station in normal time and keeps its location with the help of GPS satellite. When the jammer is turned on, the micropcopter disconnects from its base station and loses its GPS location as well. The operator does not know what the micropcopter is doing. There is a return to home feature inside the codcopter which activates in such circumstances but this feature is the GPS base feature.