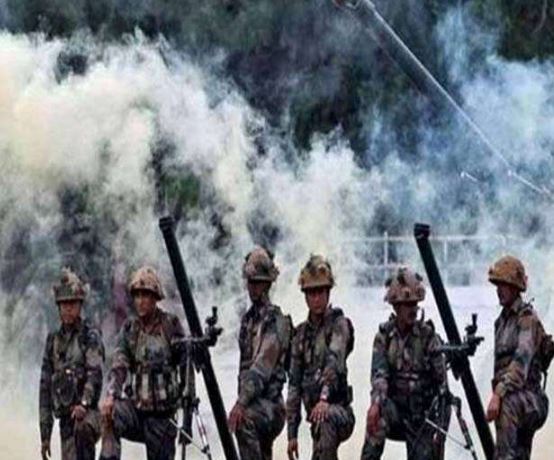 In order to disturb the ongoing District Development Council elections in Jammu and Kashmir, the Pakistani army is firing mortar with continuous fire in Poonch and Kathua. On the second day on Sunday too, the Pakistani army fired mortar and cannon shells with firepower in Deogwar sector of Poonch district. In retaliation from the Indian Army, several posts of the Pak Army have been damaged. Many residential areas came under fire, but no damage has been done. Continuing fire from both sides continued till late evening.

Earlier on Saturday, Pakistani troops opened fire in Balakot sector of Poonch. According to the information, at around 5:40 pm on Sunday evening, Pakistani soldiers started firing mortars with small arms fire at the forward posts of the Indian Army in Degwar sector of Poonch district. The vigilant Indian Army retaliated immediately, in which several posts of the Pak Army were damaged. At this, the Baukhalai Pak Army started firing cannon shells with mortar, which fell into the drain a short distance from Poonch district headquarters. The shelling created an atmosphere of fear on the Line of Control and people have left everyday work and moved to safer places.

Around ten o’clock on Saturday night, the Pak Army started firing from its Thakurpura post targeting the Panasar Rathua post of Indian territory, which continued intermittently till quarter past four in the morning. BSF 19th Battalion personnel also gave a befitting reply to the shelling. Fearing shelling, people went inside the bunkers, including the family, in the evening, due to which they remained safe. After Maniyari, Chak Changa, Karol Krishna, now Pakistan is also targeting Pansar and Rathua villages.