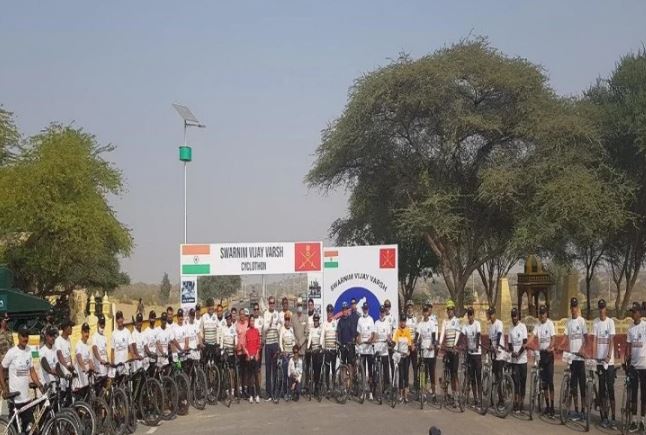 On the occasion of the Golden Jubilee of the victory of the Indian Armed Forces in the 1971 war between India and Pakistan, the Indian Army has concluded the 1971 km long Cyclothon at Longewala in Rajasthan. The Indian troops started the cyclothon from Lakhpat in Gujarat on 26 November.

The rally, which started near the outpost in Lakhpat, Gujarat, reached Bhuj via Hajipir, Khavda, traveling 200 km in the first leg. The 1971 kilometer long cycle rally ended in Longewala, running through the regions of Gujarat and Rajasthan.

A cycle rally was envisaged by Lieutenant General Arun Puri, the General Officer Commanding of the Konark Corps, to instill a sense of adventure among the Indian armed forces and the paramilitary forces. Through this rally, public awareness of corona was spread among the rural people. Its basic theme was social distancing, mask sanitization. Through this bicycle rally, the soldiers reached the ex-servicemen, the families of the soldiers who were martyred in the war, the disabled people. During this time, soldiers and warriors of 1948, 1965 and 1971 war were also honored. Representatives of Air Force, Navy, Coast Guard, BSF attended this rally.