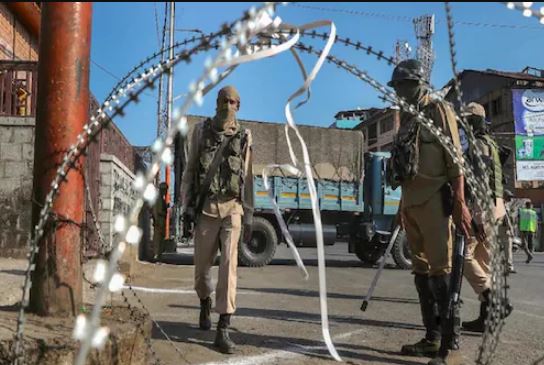 Therefore, the Indian Army is working to deal with terrorists through its state-of-the-art weapons. Recently, India has taken Sig Sauer assault rifles from America, whose firepower is very strong.

The ceasefire is never violated by India, in such a situation, the Indian Army has made slight changes in the methods of its counter insurgency operation to prevent the infiltration of terrorists. Before the ceasefire, Indian soldiers used to pile up the terrorists while crossing the LoC, but now whenever information about any such infiltration is received, the army first puts up multi-layer ambush.

After crossing the LoC, the terrorists are allowed to come for some distance and after that as soon as they come in the fire line of the Indian Army, they are killed by firing the target. Due to the changed strategy, the terrorists neither get a chance to run back nor are they able to spread panic.

Surrounded by stone clumps and pointed stars on the top of the hill, this post is also monitored day and night by Pakistan. Many such night vision device cameras have been installed on this post, so that any activities of the Pakistan Army across the LoC can be easily monitored.

The Government of India is inducting advanced military equipment into the army under the self-reliant India campaign and the NVD camera device which is designed to keep an eye on Pakistan’s nefarious activities along the entire LoC is largely indigenous and is currently with Pakistan.

There is no such technology. At the same time, a missile screen has also been installed on all the posts by adding bullet proof glass and bars. This post is at high altitude, but whenever there is firing from Pakistan post, they immediately take position with heavy rocket launcher.

Vigilance and preparedness have been increased after the drone attack on Jammu’s Air Force Station. On Friday, CDS General Bipin Rawat and Army Chief MM Naravane arrived on the same day to take stock of the security situation along the entire western border including the LoC and the International Border.

CDS General Rawat reached Jammu late on Thursday evening where he was briefed by senior army officers about the prevailing security situation. At the same time, General Rawat also looked at the preparations of the Indian Army on the LoC and the situation after the ceasefire. Army Chief Narwane reached Jaisalmer where he reviewed the situation on the International Border.