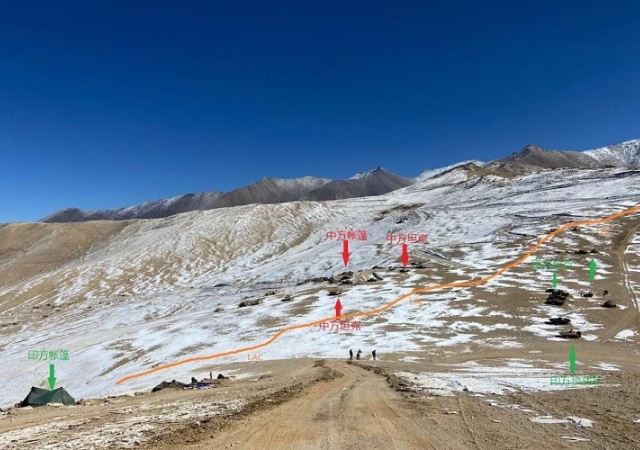 For the last eight months, a picture has come out in the midst of the ongoing tension on the LAC adjacent to East Ladakh in which the deployment of camps and soldiers of both countries is clearly visible. It is clearly visible in this picture that the tanks, ISVs and soldiers of India and China are just 100 meters away on the LAC i.e. Eye Ball to Eye Ball. This picture came at a time when the Indian Army crossed the LAC and captured a Chinese soldier who had come to the Indian border. On Monday, however, the Indian Army handed over this Chinese soldier to China’s PLA-Army.

A picture has surfaced on social media these days, which looks like it has been taken from the Indian border. But for the first time it was shared on China’s social media site, Vibo. In this picture, someone has tried to show LAC i.e. line of actuarial control by drawing a line. Also, camps, tanks, infantry combat vehicles (ICVs, also known as BMPs) and soldiers of Indian and Chinese armies are also visible in the Chinese language.

This is the first time that the picture of the deployment of the armies of both countries has been revealed in this way. According to the information, this picture is of Rechin La Pass of Kailash Range, south of Pangong-Tso Lake. This is the same area in India’s Chushul sector where Army Chief General MM Narwane visited on the occasion of Christmas and New Year. At that time, he had not only encouraged the troops stationed there, as well as reviewed the operational preparations of the Armored (Tank) Brigade and Mechanized Infantry (under which the BMP vehicles fall).

According to information received from the sources, this picture, which has gone viral on social media, has been taken from Google Earth and belongs to Rechin La Pass. Earlier, ABP News showed you the picture of the Cantonment of China’s PLA Army. That picture was also from the area adjacent to Pangong-tso lake. One-third of the 130-km-long Pangong-Tso Lake is under the jurisdiction of India while two-thirds is occupied by China.