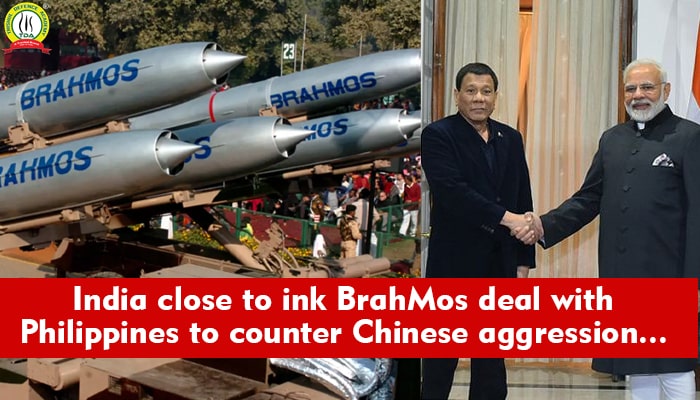 The island nation is aggressively responding to the Chinese threat with a call for self-reliance. And India seeks to ensure optimum utilization of the situation by increasing its strategic partnership with the Philippines.

Defence ties have been steadily growing between the two nations over the years. India and the Philippines have now decided to turn over a new leaf and took a giant leap in terms of defence partnership by signing a pact, which will go a long way in enabling government-to-government deals on defence equipment including the supersonic BrahMos cruise missile.

The ‘Implementing Arrangement’ concerning the military training and education, capacity building, regular goodwill visits and procurement of defence equipment was signed by both nations.

The country’s defence secretary Delfin Lorenzana has declared, “We are buying the BrahMos missiles”. Now the next step for the Philippines is to discuss a deal to procure the BrahMos.

The recent discussion has set the ball rolling and the actual agreement is likely to materialize soon. The Philippines have initiated dialogue with Indian counterparts to procure BrahMos after extensive trials. India has even offered a $100-million line of credit to the Philippines for defence purchases.

The bonhomie between Delhi and Manila is to counter China’s new coast guard law. Philippines has also staked its claim in the South China Sea region and approached the UN tribunal on the issue. It is worth mentioning that China had passed a law, which gives its coastguard powers to open fire on foreign vessels.

The move by China evoked equally strong diplomatic protest by the Philippines with its foreign minister dubbing the law as a verbal threat of war. To counter the growing Chinese threat, the Philippines has decided to pull up its socks and step up its defences.