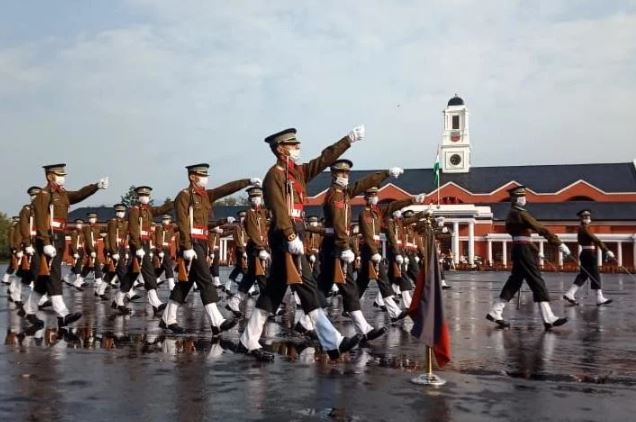 A passing out parade (POP) was held at the Indian Military Academy (IMA) on Saturday. ‘Bharat Mata Teri Kasam Tere Rakshak Banega Humne Hum’, Gentleman Cadet stepping on this song IMA, were greeted by the attendees as they reached the drill square.

Today, 325 young cadets became part of the Indian Army as soon as the last leg was filled at the Indian Military Academy (IMA). With this, 70 foreign cadets also passed out. Deputy Chief of Army Staff. General SK Saini took the salute of the parade.

With the advance call at 08:50, the chest taunts arrived for the parade with immense courage and gusto. Parade commander Maji Giridhar then took place at Drill Square. Every person sitting in the audience gallery was mesmerized by the cadets’ spectacular march past.

The Deputy Chief of the Army conferred the overall best performance and other outstanding honors on the cadets. Vatandeep Sidhu was awarded the Sword of Honor. While Maji Giridhar got the gold, Direk Singh Yadav got the silver and Shikhar Thapa got the bronze.

Due to the Corona crisis, the passing out parade took precaution at all levels. Not only the spectators’ gallery, but also during the parade, the rules of physical distance were completely followed. Each marching squad usually has ten cadets in a line, but their number is kept at eight. So that the distance between the cadets remains a distance of two meters. Apart from this, along with Gentleman cadets, all military officers were also wearing masks.