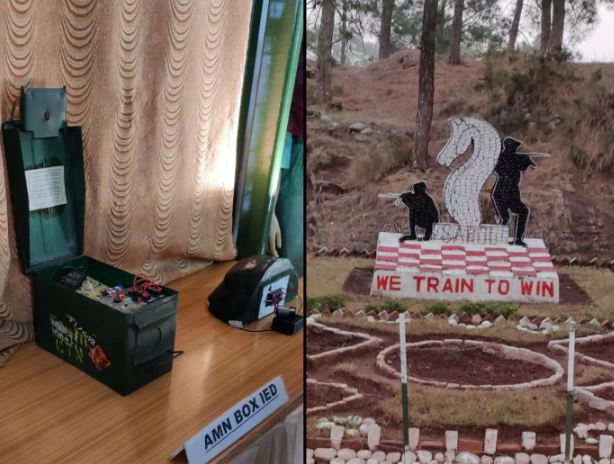 The ceasefire violation by Pakistan is continuing on the LoC and a nefarious plot continues to try to infiltrate the terrorists. In such a situation, how the Indian soldiers maintain their rule over the LOC, for that the team of ABP News reached the Core Battle School (CBS) of Rajouri Sector of LOC. From here IED blast training to stop infiltration and to pile up terrorists.

Soldiers are trained before deployment to the LoC in the core battle school with the motto ‘We train to win’, that is, we give training to win. According to CBS military officials, there have been several incidents of IEDs on the LoC in recent times. The Border Action Team of Pakistan Army crosses the LoC secretly and plant the IED near the Indian Army posts or on the path of patrolling. Therefore, prior to deployment on the LoC, Indian soldiers are given special training to deal with the dangers of IED blast.

CBS is a very important training center of the 16th Corps i.e. White Night Corps located near Nagarot near Jammu. All the soldiers who are posted in the LoC or the hinterland from Akhnoor, Rajouri, Sundarbani, Naushera, Mendhar, Krishna Valley to Tails under the 16th Corps are trained first here.

Soldiers are made aware of different types of IEDs here. These IEDs can range from an animal like a dog to a thermos and ammunition box. In addition, it is tied with a very fine wire on the patrolling route. In such a situation, soldiers are taught not to touch any unknown thing while patrolling. Apart from this, step on the way.

Terrorists are not able to target army convoys etc. with an IED, special tools are given for them to detect IEDs. These devices become active as soon as they detect any IED and the alarm sounds. Soldiers are alerted as soon as the alarm rings. Apart from this, the Indian Army has prepared a special jammer to block the IEDs. The name of this jammer is ‘Ashi Mark-3’. Because it is vehicle-mounted, it can be kept in the vehicle and driven with the convoy. Whatever IED will be in the range of Eshi Mark-3 can be jammed. Let me tell you that since the Pulwama attack, the risk of moving-IED on the convoy of army and security forces on the road has increased significantly. Therefore, such a jammer is used by the Indian Army.

According to the information, 29-30 thousand soldiers are trained in CBS every year. Because here comes the soldiers who are already part of the army, so the soldiers are given 14 days LOC-training. In these 14 days, besides IED training, training is given to prevent infiltration of terrorists. Also, if terrorists cross the Line of Control (LOC) and enter the Indian border, then how they can be neutralized in the forest is given training.

According to the information, the purpose of Core Battle School is to provide physical, operational and cyclical training to the soldiers. It is very important to give psychological training because to prevent the ceasefire violations and infiltration of terrorists, it is very important for the soldiers to be physically strong as well as mentally strong.