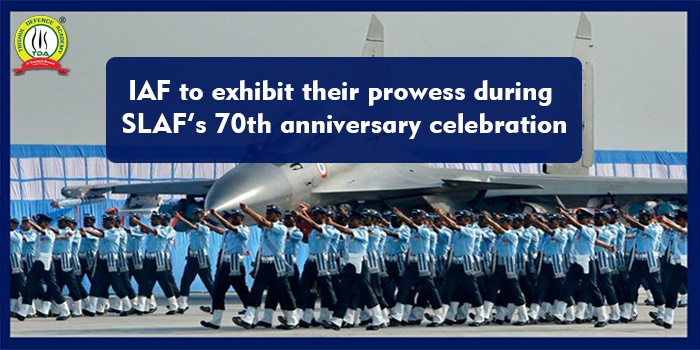 NEW DELHI: Indian Air Force’s Suryakirans, Sarang, and Light Combat Aircraft Tejas are all set to add spice to the 70th-anniversary celebration of Sri Lankan Air Force (SLAF), which is scheduled to kick off on March 2 and culminate on March 5. The invitation for participation has been extended by the Commander of the SLAF Air Marshal Sudarshana Pathirana.

According to a press communiqué released by Indian Air Force, “Suryakirans, Sarang and LCA Tejas will take part in an air show at Galle Face, Colombo, to mark the 70th-anniversary celebrations of SLAF.”  The communiqué further informs that the move to participate in the 70th-year celebration demonstrates the strong professional bonds that the two air forces share and further improve our ties. It is worth mentioning that both IAF and SLAF have regularly witnessed active exchanges and interactions in the past, which include diverse fields like training, operational exchanges, and professional military education courses. The IAF team has earlier participated in SLAFs 50th-anniversary celebration in 2001.

NEW DELHI: The Indian Army has claimed that a ceasefire agreement between India and Pakistan along the Line of Control (LoC) will have no bearing on counter-terrorism operations in Kashmir, which are going to continue unabated. Army’s northern commander Lt Gen YK Joshi expressed confidence that the Army will not exhibit any laxity and maintain alertness every step of the way.

Addressing the gathering, the Army Commander brought out that there has been a reduction in terrorist initiated incidents, stone-pelting activities, and protests as a result of the tireless efforts of the Security Forces and the people of J&K. However, our policy is to stay alert at all times and there is no scope of laxity. “Whenever anyone has dared to attack the integrity of the nation, the Army always stood like a shield against such attempts to spread disturbance and will continue to do so in the future. Whenever anyone raises an evil eye on our country, the Indian Army has replied strongly,” he said. He added that the Army played a key role during the Covid-19 crisis with doctors, nursing staff, ambulance, and medical corps staff working 24×7 to meet any contingency.